It was a hard morning.  Selena accompanied her mother to the merchant's inn in the Merchant District, where a merchant was already waiting for her along with hired guards.

"Mom, regardless of whether there is news from you or not, later I will still visit this sanctuary of Meridia," Selena said, hugging her mother, "Who can I ask about you there? Who exactly will know about you?"

"If nothing has changed, then redguard Demetrius is looking after the sanctuary. He always has a full head of hair. You won't confuse him with anyone else. But, dear, remember everything I warned you about," the mother replied and kissed her daughter on the forehead.

"It's time for us to hit the road. Horses are already ready for us at the exit from the city. Goodbye, my dear. I love you. May luck accompany you," she said, walking away towards the main gate.

"Goodbye, Mom. And I love you. Let Meridia help you," Selena said with difficulty holding back tears.

At first she wanted to accompany her mother all the way to the stable, standing not far from the entrance to the city, but her mother insisted that it was better to part in the Merchant District in order to smooth out the burden of parting at least to some small extent, and not look after the caravan going into the distance.

When mom and her companions disappeared from sight, Selena, after standing at a loss for a couple of minutes, finally came to her senses and remembered that her mother had instructed her not to waste time and immediately go to the Arcane University.

Being still in her shortened robe of the Mythical Dawn, she decided to go to Raminus Polus. As far as she knew, the Mages Guild was calm about the cult of the mythical dawn.

"I think I don't have to change clothes. In the guild of magicians, they object only to necromancer clothes," Selena thought.

"By the way, since I'm in the shopping district we need to go to the staff dealer. I probably won't sell this goblin shaman staff, but I would just like to know its approximate cost."

The staff was still in Selena's system inventory. Therefore, before going to the University, she first went to a store called "Rindir’s Staffs".

She pushed the door to the store, but it turned out that it was still closed. Hearing footsteps behind her, she turned around and saw a guard walking briskly on the pavement.

"Excuse me! Can you tell me when the Rindir’s store opens?", Selena asked him.

"It usually opens when I walk around the Merchant District for the third time during morning duty. I'm finishing my second round now. Draw your own conclusions, citizen!" he replied and walked on.

I decided to wait, and about half an hour later I heard the door lock open from the inside, after which I went inside.

"Hello! These are the "Rindir’s Staffs". I am Rindir. I sell magic staffs. However, you can guess about it," Rindir, a forest elf, or bosmer, who was standing behind a large counter, quickly said a memorized phrase.

"Hello. I guessed it. I would like to show one staff and ask about its value."

"Just don't point it at me," he suddenly said, holding out his hand with an open palm forward, "Be careful. And in general, I usually don't buy staffs by hand."

Selena carefully removed the goblin shaman's staff and showed it to the merchant. He carefully took it in his hands and, after being silent for a couple of seconds, said:

"So. I can see that it is 80 percent charged. He attacks with electricity and takes away 5 health units. I would value it at 100 gold. Overall, it's a weak staff. And I don't buy goods by hand. You can ask in the "The Copious Coinpurse". It seems that Toronir buys everything. I only deal with staffs that have been certified by the University of the Sacraments. I advise you to register it with the Mages Guild. They will add the staff to the register and there may be a person who wants to buy this staff, for example, from another city."

"Hmm, I can just show this staff to Raminus now and ask him to register it," she thought.

"Well, thank you for the information!" Selena replied and left.

After leaving Rindir, she went to another store indicated by him, just in case. Everything was sold there, from edged weapons to watermelons and pumpkins, but all the goods were not of high quality.

The seller was not at all impressed with this goblin staff, and agreed to buy it for only 50 gold, and Selena refused, not wanting to make it so cheap.

"Well, I'll keep it to myself for now. Maybe we'll have to fight off someone," she decided.

She left the Merchant District and went to the University, which was also located within the city.

When Selena entered the reception room in the archmage tower, she immediately came across a combat magician who was standing at the entrance and acting as a guard. He was a sturdy man in the usual imperial guard armor, but with a blue hood, which indicated his connection with the guild of magicians.

"Good morning. I need to see Raminus Polus," she told him.

"Master Wizard Raminus Polus will begin his reception in a few minutes. You can sit down and wait," he replied, pointing to a carved bench.

A magician with dark ashen hair in a long blue robe with golden patterns was already sitting on this bench and was carefully reading a book. Selena came and sat down next to him on the bench, but he did not even look in her direction, continuing to run his eyes over the lines of the book. 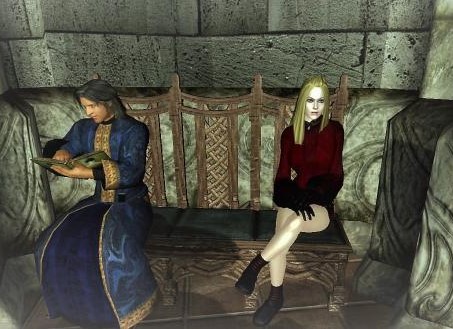 She was used to seeing the lustful glances of male representatives who eagerly stared at her slender snow-white legs. But this man did not look up from reading.

"Did this magician also come to Raminus? Will I have to wait then?", Selena thought, and the next second a bell suddenly rang.

She looked around, but did not see any bell, and did not understand where the sound was coming from.

"Master Wizard, it's time to start the reception!" the battle mage announced solemnly.

"Thank you, my friend!" the magician sitting next to me suddenly responded enthusiastically and got up from the bench. He slammed the book shut, after which it disappeared unnoticeably in his hands, apparently having moved to his inventory.

Apparently, this man was Raminus Polus. Selena had never seen him before, neither on the streets of the city, nor at the alchemy school.

After that, a high-ranking magician walked up to a bulky table standing in the middle of the room and stood next to it. Selena looked at the guard and he immediately showed her with a gesture that she could also come to the table.

Raminus Polus smiled at her affably, as if he had just noticed her presence in the reception area.

"Yes. I am a Master Wizard and a member of the Council of Magicians. How can I help you?"

"My mom is Camilla Erana, and I am her daughter Selena Erana," she said and paused to watch the magician's reaction.

"Oh, yeah. I know her. I am sorry for you, she is seriously ill," Raminus replied.

"Thank you. She went to the sanctuary of Meridia because she thinks that Meridia is her last hope. Now I'm alone. Although I have a living space, but no work. I graduated from alchemy school not so long ago. My mom told me that you could help me find a job."

"So...", - said Raminus, made a thoughtful look and put his index finger to his chin, - "What is your numerical indicator of alchemy skill after graduation?"

Selena remembered this numerical indicator, but out of excitement, just in case, she quickly checked her skill that connected with the System.

"So... thirty-two," she replied without much pride, since such an indicator was low among school graduates. Some other students of alchemical courses reached an indicator equal to fifty units.

"So...," Raminus said again and took out a magazine.

He began to record data there - name, race, and indicators of the alchemy skill.

"I assume your alchemy skill is the highest among all your skills?" he asked.

"No. My eloquence skill is the same as my alchemy skill."

"I see. Well, eloquence is not so relevant at the moment... So, it means that by skill level you are a "Apprentice» in alchemy. It means that you can determine the ingredients...", - Raminus fell silent, waiting for Selena to finish the sentence for him.

"It means that I can detect two alchemical properties in ingredients," she replied.

"That's right. This is too low a level to find an application for your skill at the University of Mysteries, and even in the imperial city," Raminus said, showing a sad look, "Alchemy shops, such as the Main Ingredient or the Gilded Decanter, cooperate only with alchemists whose level is not lower than the “Journeyman”.

The news was disappointing and Selena immediately frowned. Did she come for nothing?

"But maybe your services may be needed somewhere else. For example, in the branches of the mage’s guild in other cities of the empire. I can find out if an alchemist of your qualifications is required somewhere," said Raminus.

In his words, as it seemed to Selena, some ray of hope flashed.

"Well, find out, please! And one more thing... I have a staff. I want to show you," Selena said and turned to the guard.

The battle mage had already started to say something, but Selena beat him to it:

"I'll get it out carefully and I won't point it at anyone," she warned.

The guard nodded at her, but remained focused. She took out the goblin shaman's staff and showed it to Raminus.

"It's a staff that attacks with electricity. Rindir from the “Rindir’s Staffs” store valued it at a hundred gold," Selena said, "I could sell it to you, or as Rindir said, you could put it in the register to find a buyer."

Raminus took the staff and studied it for a few seconds.

"He has no defects. But this is a weak staff, although it may be useful for beginners. I'll put it on the register," he said and took out some other thick magazine.

"So... his inventory number will be... 1009," said Raminus, scratching his pen on the paper, "If a buyer appears, we will notify you. Or you'd better find out for yourself. There's a board in the Midas store that lists all the magic items that are in demand."

"Now I can find out if there are any requests for an alchemist of your qualifications. I'll have to leave for a minute," said the magician, putting away both magazines.

"I will be grateful to you, Master Wizard," Selena replied, smiling at him.

The misadventures of an Imperial-girl (+18)
Oldest | Recent
Search
Your changes has been saved.
Action Required