Daylight was soon to come. There was one small problem with the communal house’s latrines. Originally she intended to have a small stream of water running below as a rudimentary sewage system but the natural plumbing expert vehemently refused against using her waters for waste disposal. Instead what she had proposed was the use of slimes. They apparently often inhabited waterfronts and other moist damp areas. Though Llynbel herself shood them away from her waters. Supposedly since ancient times, in some civilizations they were used as waste disposal as they consumed almost everything, excrement included.

According to Llynbel they were crepuscular, being most active during dusk and dawn water based entities. She hoped to find some of them during those times at the edges of the forest. Thankfully she had a lead to follow, the flowing rivers.

‘Round sloshing things… yeah, great descriptor Llynbel, very helpful when I’m next to a body of running water which splishes and sloshes all the time!’ Walking along the stream on the lookout for slimes for a few hours now with no luck so far.

The rays of light from the morning sun shone upon the forest and illuminated woods revealing glints of white on the trees in the distance swaying side to side. As she approached the source to take a closer look, she could pick up the sounds of… something. Honing her ears she could make out viscous sounds…

‘What the hell is that noise…? Sounds like someone is eating… a cold mac & cheese?’

On the trees, under its branches a gelatinous spheroid mass was hanging from it wobbling in the wind. The murky white transparent gel like body made it possible to make out the core like object at the center of its round form. Looking around she could see a number of them on nearby trees as well feeding on the sap of trees.

‘These guys are probably it, about time… one problem… How do I carry them? Do I just…’

Reaching her hands out she tried to scoop it up from under it, the cold tingling wet sensation spread on her palms. Although some parts of it sagged into the gap between her fingers it seemed that slime’s membrane was firm enough to hold its integrity.

Thinking that it was being attacked the slime started to try and squirm out of her hands.

Soothed by the unintentional use of magic it relaxed, though that didn’t last long before it started to move around for different reasons. Feeling up and around her hands it spread a tiny prickling sensation on her hands.

Dewy and gluey substance was left on her hands where it was just at.

‘What, you want me to take taste?’

‘How about no? You find another way, I'm not sucking on random things I pick up from the floor.’

‘Well that took a left turn in a hurry.’ 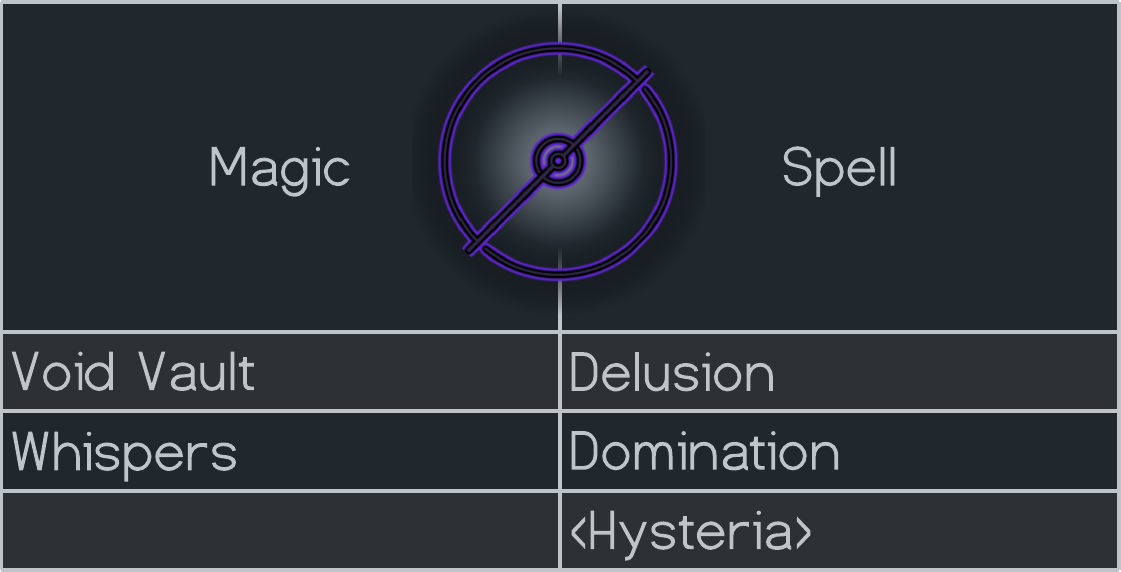 ‘I’m not sure if I’m supposed to be concerned or excited from these spells… I think both… both is good.’

>Suggested action, Use domination on subject to acquire anima sample.

>Alert. Administrator is recommended to issue simple and precise instructions to units to avoid misintentions.

Alice who was heretofore a silent observer broke her reticence.

As the magical energy poured out of her and seeped into the slime on  her hand an unusual sense of connection was established. Different from what she was accustomed to, yet not too dissimilar from kindred. The connection was one sided, like burdensome chains were lugging the gooey being into compliance forcibly and cold without the empathetic bond shared.

'That… feels off somehow… not sure if I like it… I think kindred has more… life to it. With kindred we have this sense of unity. I can feel the emotions, intents, wishes and desires, the mood, experiences… everything of everyone. Compared to all that this… this is hollow. I definitely prefer kindred over that… what a strange spell.'

She did not know that hollowness was the norm for spells of its likeness. Kindred itself born from the two's unlikely but unique union was the outlier with its special characteristics. As the last portion of the energy was infused, the spell instilled the creature with replete obedience. Though from the side it only looked as if she was merely holding it.

>Composed of four closely related cell families each specialising in a specific role.

>Able to carry out basic functions of life.

'Mmmhm, that's nice and all but can it dispose of human waste?'

'I'll take that as a yes. This is a pet I can get behind of… minimal maintenance pet that doesn’t bark at nothing at 3AM when the whole neighbourhood is asleep. Thought now that I think about it… the incessant, wet… mouth sounds are a minus… maybe someone else might like it.’

‘Heard they could grow some pretty massive size, that gonna make me and the girls any trouble soon?'

'Ah, I remember that, something to do with the square cube law anyway… I should just grab a few more…'

After spending most of the morning collecting various slimes without the use of Domination Alicia returned with a packful of slimes and dropped them into the simple sewer lines below.

‘Occasional input of wastewater should stop them from drying up… I think. Anyway there are few things I wanted to do today…’

The freed girls had a light breakfast, depleting the last of the supplies stored in their packs. The previous night they were told that in the morning Alicia would decide their future course. They only understood that it was important and with it some couldn’t help but worry with breaths held.

They didn’t know she would pick one of them so suddenly, a panic twofold fell upon a single girl. Unvoiced alarm quickly spread throughout them though their expressions didn’t hide it well.

Slowly with wariness the girl stepped up to Alicia, her eyes jumping all around her searching for an escape of sorts.

As she did so as per Alicia’s words she seemed to have relaxed a little as her pounding heart eased a bit. Or so it would seem from what she could tell with Pallesthesia. Without anyone knowing even the indescribable voices of the void too soothed her racing mind.

Slow and barely noticeable nods were her only reply.

So she said and held out her hands. As soon as the girl touched Alicia’s outstretched hands she felt something extraordinary. 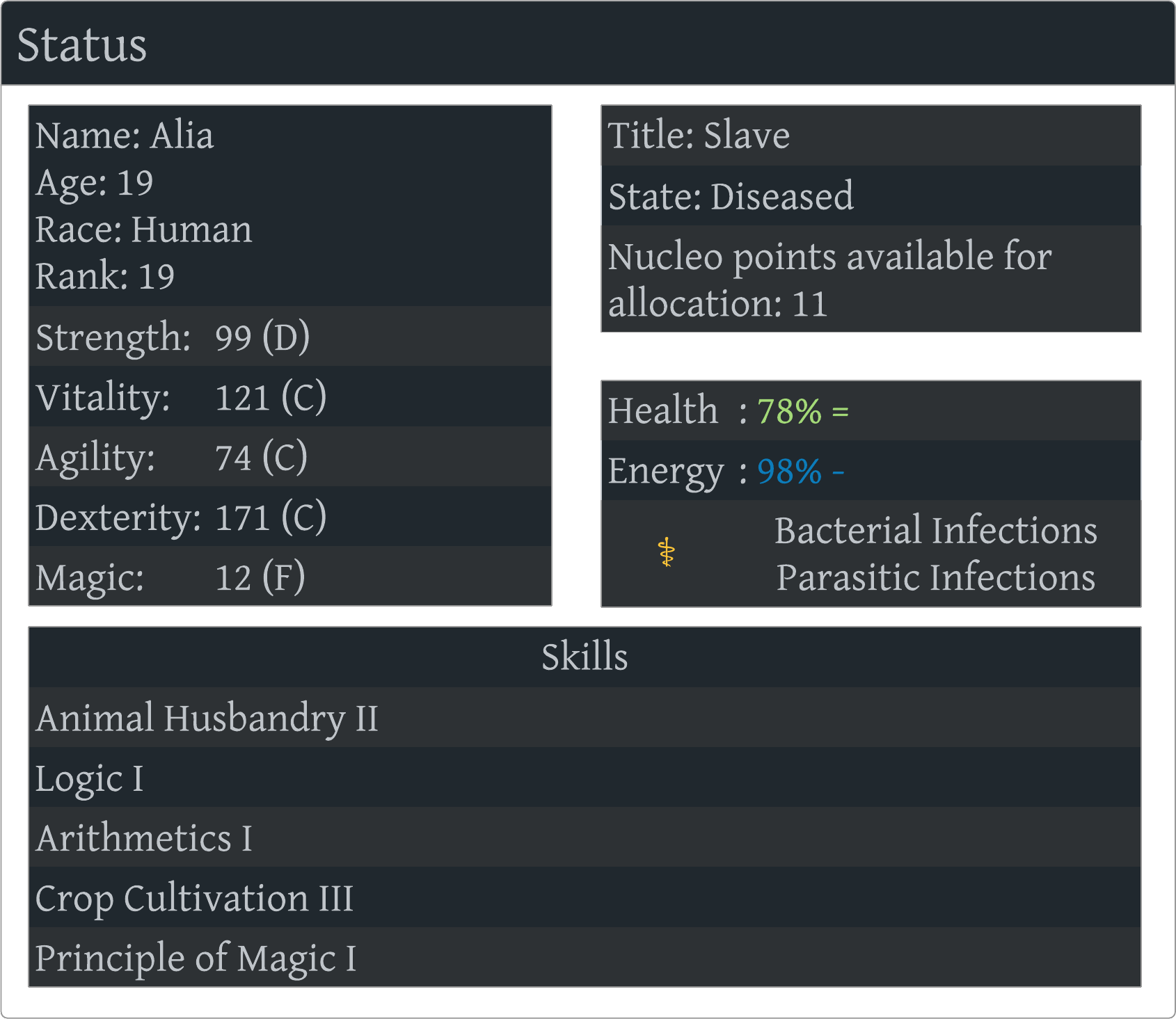 Linked by something unseen, temporary connection of Soul echo allowed souls to resonate. It is this resonance - an echo - that carries the information about itself. It couldn’t be fully interpreted by humans as such she couldn't comprehend the information of Alicia's soul, but she could glimpse the overwhelming tenor. Without the Alma system’s quantification Alicia too would only have a vague understanding of the vital statistics.

‘Hold up just one second… something ain't right. I’m pretty sure I had higher stats than this girl when I was a much smaller spider, was I strong enough to overpower an adult person?’

>Statistics are quantified relatively based on the target's race and body mass.

‘Great, got none of that. Explain it again like I’m stupid.’

>Any unit’s displayed statistics are based on and relates to the target's race; tangible statistics grows relatively as the subject’s body mass increases.

‘Okay that makes sense… I think. Still that seems a little low even for that. Say what’s up with her having her own allocation points, can I use that?’

>Available points represent the target's potential for growth. System is able to use the anima points of others to develop the target's soul if the recipient is receptive.

‘So with you I can pull out people’s inner potential. Neat. One more thing… Where did those never seen before skills came from? And why don’t I have the option to get those?’

>Skills unessential to administrator survival have been temporarily shelved under the trait ‘Inherited Will’ for purposes of clarity. Expand?

‘Sure gimme a peek, I didn’t actually take the time to have a look at it.’ 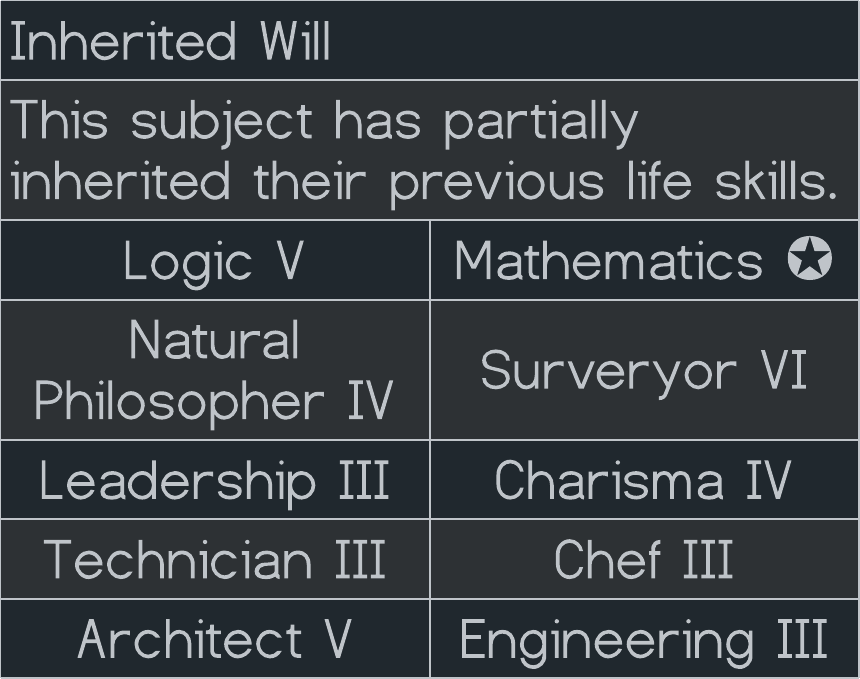 ‘Huh… that’s cool… Yeah I can see why they wouldn’t be helpful to me… Hey why’s my architectural skill higher than engineering?! You picking a fight with me, you figment of schizophrenia?!’

Her brief but intense indignation caused by the discovery of her former skills were transmitted through the soul echo, causing Alia to tremble in fear. She of course didn’t know it was an aimless anger directed at nothing in particular. So she interpreted it as it being pointed at her.

‘I got sidetracked, anyway she has some infections, few levels in constitution and regeneration should patch that up… Animal husbandry and crop cultivations… sounds like farm work, so she's a village girl? She might be good at taking care of animals then…

What else… managing everyone is gonna be troublesome work for me… I’ll make you their representative, leadership and…  charisma why not. The leftovers can go to beefing up her stats a little.’

It felt as if hours had gone by but verily only a few moments passed. From the nebulous bond came a surge of power that settled within her. She didn’t know since when however she found her body somewhat lighter and power unknown seemed to be welling up from inside her.

Something had changed, she felt as if she was a different person. Turmoil of emotions from Alicia’s fury and her grace clashed for but a single second before it all simmered down. From its aftermath she… was born anew.

Girl who was holding Alicia’s hands just then crumpled down onto her knees, reverence glistening through her misty eyes. Which even Alicia found it surprising, evident by her subtle flinch. Her voice although sounding slightly shaky at the first turned to a mighty acclamation.

‘Whew, that’s all of them… they’re mostly village girls and street kids but some of them seem to be much more… talented. What the hell is statecraft…? Alma was a great help for making choices and what not, it could do it even automatically for me, though I still want to review any changes before committing to it. I’m basically changing with their entire lives with the difficulty of a coloring book.

Everyone has their things to do now should keep busy but what they can do is still limited… Taking care of the bees and the goats should be a good starter for everyone. I’ll just have some of the wolves keep an eye on them so they don’t hurt themselves. After that there’s lunch… For me there’s the house extensions and I need to go pick up dauntless from the old man…

I just thought Alia was simply more… weaker than the norm but nope… they are all pretty weak, numerically speaking I need a bigger sample size, and I just have the test subjects. There’s one more thing I need to try out too. The Geneva convention hasn’t happened in this world so there’s no protection for prisoners of war yet, for me it's a Geneva suggestion…What international humanitarian laws? They have no power here. Those non-existent laws can’t stop me.’

It came out late because I had to do some background reorganizing and cleanup. You don't see much of it because you see the front, the finished product of the process. I was hoping I would catch up with my schedule. Obviously didn't happen.

As always please point out any errors, I'll correct them as soon as I'm able to.