Visit my PATREON:https://www.patreon.com/Take_the_Moon
Prices at the end of the chapter.

The Council of The Wise is composed of members of the 12 powerful families of the Diablo Empire, which represented the will of the nobles since the nobles could not intervene in the politics of the empire directly. Duke Buhari was a commander, so he could intervene in this particular matter.

Unfortunately, with the new emperor not finding a genetically compatible partner for reproduction, the power of the empire was oscillating, and these shrewd old foxes would not miss the opportunity to steal a little more power into their own pockets.

Of course, all this was just another war of power within the imperial palace, which made Odile even angrier, as these political fights would jeopardize the people of the Beast Zerg and the Elemental Zerg.

Although the high technological advancement, the solar system where the Star of Destiny and the Star of the Miracle are still quite distant. It would take at least two years for the full exchange of battalions if Odile could not get results.

This gap time could cause two things: 1. Odile's troops would have to stay parked for two years waiting for the transfer and 2. During the exchange, there may be attacks of these strange creatures, as Odile's soldiers will not be able to do anything since technically they could no longer participate in these operations. So, all that was left was for the Beast Zerg and the Zerg of the Elements to fight alone.

IF YOU ARE READING THIS NOVEL ON ANOTHER SITE OTHER THAN QIDIAN WEB NOVEL AND SCRIBBLE HUB, YOU ARE READING ON A PIRATE SITE. THIS STORY IS FREE, BOTH ON THE QIDIAN SITE AND ON THE SCRIBBLE. DO NOT SUPPORT PIRACY! GIVE SUPPORT OF THE AUTHOR.

Military protection was left with the Devil and Angelic Zerg, who made a deal with the other Zergs who would go on this voyage of exploration. Both the Demon Zerg and the Angelic Zerg, they will receive 20% of the territory of each planet that the other Zerg scans can colonize.

The result of the test of the New Emperor's Intergalactic Compatibility System meant that General Azikiwe had to spend time looking for a suitable bride. Also, after finding a proper bride, this "bride" almost died, which caused Odile to have to postpone many plans he had to go to that newly discovered universe.

Now that Odile was bound to Mu Liang after mating, he would have to take even longer, staying away from the expedition at least during the first month and he would have to make the marriage official quickly.

Well, that's what Odile wanted when he went to find Mu Liang in recovery, only there was the attack by the chaos creatures to the Zatrara Empire, which is closely linked to his omega.  Also, in less than a month he would know if Mu Liang was pregnant or not.

Did Odile feel a severe headache when thinking about what he would do if Mu Liang is pregnant? Because he couldn't leave Mu Liang alone in the palace, right? Would he have to take his fiancé or husband to the unknown battlefield, even though this person was pregnant?

That would be impossible and probably the Council of The Wise would force the third Prince Zerg Demon to leave Mu Liang in the Infernal Palace until the child is born.

Of course, Odile could entrust Mu Liang and the child to his older brother the emperor, but there were so many dark currents fighting for the power of the Diablo Empire, that General Azikiwe would not know whether this son or daughter or even Mu Liang could have a good life.

Mu Liang being pregnant was a blessing and a concern not only for Odile but also for the new emperor and the Imperial family. Mu Liang's pregnancy would retain the gloomy currents surrounding the new emperor, as the lineage of a future emperor would be guaranteed, so the empire would not be thrown into chaos.

However, Mu Liang's pregnancy would make Odile have to choose to leave his son and his omega behind and leave for the battlefield, or he would have to give up military power, which would allow other noble families to seize power, which could put the current imperial family at risk.

At the end of the day, Odile is the third imperial prince of the Diablo Empire.

So, Odile Azikiwe had a headache, he was trying to think of a solution to this, he didn't want to give up anything.

Of course, if Mu Liang wasn't pregnant... Well, the situation was only going to get worse, as the Diablo Empire would be in crisis, moreover, Odile would be forced to stay away from the battlefields until Mu Liang became pregnant.

The estrus of an omega happened once a month and lasted two days. On normal days an omega can hardly get pregnant, not just omegas. ABO genders could only become pregnant during the estrus period.

Of course, not to mention whether Mu Liang himself would agree to Odile's terms about having a child. Since this son would practically be an imperial treasure and could be taken over by the new emperor so that he might create as his son.

That, Odile Azikiwe, had not yet told Mu Liang. It was better to expect to see the result, whether or not he is pregnant, Odile could tell what it meant to have a child with him.

IF YOU ARE READING THIS NOVEL ON ANOTHER SITE OTHER THAN QIDIAN WEB NOVEL AND SCRIBBLE HUB, YOU ARE READING ON A PIRATE SITE. THIS STORY IS FREE, BOTH ON THE QIDIAN SITE AND ON THE SCRIBBLE. DO NOT SUPPORT PIRACY! GIVE SUPPORT OF THE AUTHOR.

For now, Odile is only thinking about solutions based on the fact that Mu Liang is pregnant. Since if this fact is not realized it would not have many options but to stay out of the battles.

There was still this eminent great war in the Zatrara Empire, which for now was only at the level of small conflicts with vampires, however, according to the new emperor of the Diablo Empire, vampires are divided into small battalions and emerging from various places in the Xenon Universe. All these vampires seemed to have only one goal, which is the Zatrara Empire.

So, the question arises, how could so many vampires hide without anyone realizing it?

Was the Zatrara Empire the only target of these vampires?

Was Mu Liang having his soul hurt an unfortunate coincidence or something?

Of course, all this would ensure that Mu Liang accepted the marriage to Odile, as the Zatrara Empire was relying on the support of the Demon Zerg in this war.

On the one hand, Mu Liang is fine now and Odile was also linked to him, which meant the plan went wrong. The problem is that Odile has no idea who the mastermind behind all this is.

Hello readers!
How is everyone doing?
Last chapter of this week!

A good image to represent the battle between Zatrara and the Chaos Vampires. Of course, the Mechas placed there can only be classified as soldiers in the face of the great technology of this interstellar era. 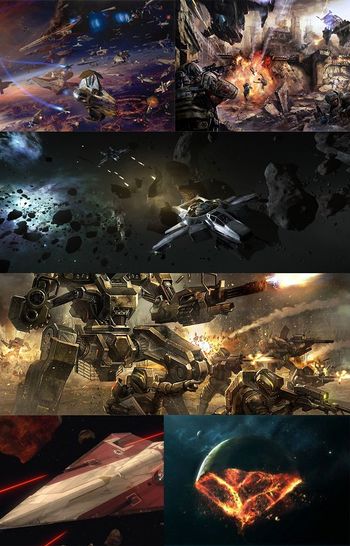