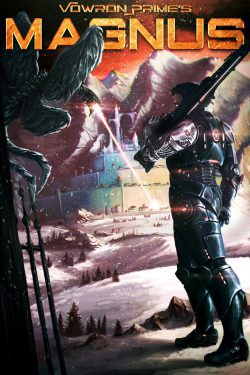 2/1/2021 NOTE! This trilogy is being published by Aethon Books starting with book one on 5/1/2021. At that time, the book will be removed from RoyalRoad, and eventually, the entire trilogy will be removed. I will post all of book three here before it is taken down, giving all readers a chance to read it for free.

Magnus Cromwell—MC to anyone but his little sister—kills for a living. He’s organized, professional, efficient. Like a machine. But when his family’s life is on the line? That’s something else. That calls for the kind of warm-blooded vengeance that scorches earth and summons tungsten rods from space, leaves a whole lot of melted flesh, and no one to tell the tale.

This should've been a blue milk run. As by-the-book as it gets. With Nina out safe and the opposition decimated by hypersonic gunfire, MC wondered where they got the guts to even try. Then something hits him. Lays him out cold, and leaves him waking up to a fantasyland with nothing but his armor and a half-written note to guide him. It's a strange place where even stranger predators eye him for their next meal. Where his life’s on a timer, and where the darkest horrors haunt his dreams, painting visions of death.

There's no right day to fuck with Magnus Cromwell. But the world sure managed to pick the absolute wrongest one.
---

- MC is strong and gets stronger, but fear not as his life is anything but easy.

- LitRPG-lite. Expect abilities and progressions, but there will only ever be a handful of them.

- Science Fiction and Fantasy collide! There may or may not be romance in the future but there will never be more than one love interest if it does happen.

- The focus for the first book will be on MC. This will also be the case going forward, but the cast of characters will open up in the later books.

- Book one/100k words already written & edited. Book two of the trilogy is underway. This series will not be dropped.

Honestly, I'm not a big fan of sci-fi and thought there are some elements from it, the story itself has a high-enough fantasy too. The combination of both makes it unique in its own way and made me keep reading it till now. I like the way in which this story is going. The start was action-heavy and the scenes later show great promise. If you want a lot of action and fun with some mystery to boot, that is the story for you!

The author starts with a unique writing style, which I wasn't used to, but I got used to it fast enough. And I have to say, it's wondefully executed. The flow is smooth and the poetry elements in it just makes it a lot more enjoyable.

No problems there. Even if there are, the author fixes them fast if someone points them out.

Going to fantasy/game world? I'm not sure which it is of the two, but that only makes it more interesting. There are many elements that give you only more questions, as the author introduces them one by one, but there are some asnwers as well. It's enough to make you keep reading through it.

Well, the emphasis here is on the main character, and why not? He is the OP MC, a bit cold and aloof, but that is no problem. Though, honestly I wish there to be a bit more work on the side characters as well. As of now, we don't see much in this regard, but that doesn't make the story worse in any way.

A promising story with a lot of elements to grab your attention. It's action packed with mystery in it that brings more color into the picture.

The Grim Reaper is a Military Officer
By JDC_Writing
Credits and Huge Thanks to Aoibh for the Cover Art! Theo Holland, a Colonel of the army was fighting for his life as he was pursued in the middle of the night in a dark forest, he was pursued than none other than his own comrades, not long

I Was Stupid and Hit Someone With My Truck. Now, I Have To Prove That He Was Reincarnated In Another World
By Cedestroyer
Light Novel There’s so much isekai out there where the protagonist die because of trucks. What happens to the truck drivers? Van Driver is a self made man who lifted his family out of poverty by being the best truck driver of the

Farmer: The first
By SilentTreatment
Jason was one day walking home from his work hoping for another uneventful day, but that was only wishful thinking. He saved someone, but because not all good deeds are rewarded he unexpectedly died. He didn’t go to the afterlife, but
Action Required