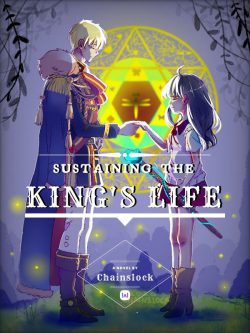 On a secluded mountain situated upon a kingdom known as Feuersturm, resides a seemingly trifling cabin with an unlikely duo as its inhabitant—a witch, and her apprentice who presumably comes from a clan sought after by slave traders. Faustina is a sixteen-year-old girl who fled the slave market with the help of a sickly witch named Eula, who later on trained her as an apprentice for the span of seven years.

Plagued with a mysterious disease for several years, Eula died despite the efforts Faustina had exerted to cure her; in her last breath, she left an odd request behind.

"Sustain the king's life. This is your duty. Do not adhere to the prophecy."

To which the odd plea shadowed a bizarre series of events, a consequential sentence, similar to that of a premonition. The same night the phrase was muttered, the chain of events followed:

A warlock's intrusion to their home, with a peculiar yearning to resurrect Eula from the dead...

and the king himself, asking for Faustina’s aid.

(The artwork belongs to me. Visit more of STKL artwork on my twitter: @chains_lock

Tutoring the Spoiled
By bigbear51
Trying to live out an existence is hard. Especially for Kouji Arisawa ever since his parents passed away in an accident. He’ll still try his best, and make something of himself. It’s too bad that he can’t go the the city&#

The Ulfhedinn of Dueling School
By HokuouTenrou
In the future, where magitek is a part of daily life and dueling is a popular sport, one boy from a remote village in Iceland entered the most prestigious Duel Academy, hoping to see the world and be the best, strongest duelist ever. En gard
Action Required