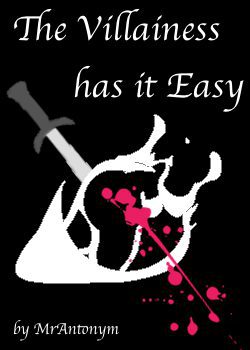 After dying, a girl reincarnates into the world of an otome game she had played in her previous life. The catch? She was reincarnated into the body of one of the game's love interests. Thrust into a brutal underworld and unloving home worthy of the tragic love interest character, she must struggle against a world poised to kill her at any moment while dealing with her gender swap in a medieval world of nobles and knights. Compared to that, the villainess has it easy.

Chapter updates on Sundays (plus or minus a few hours)

It's a really interesting story! If you could enjoy a slightly darker setting with a flawed anti-hero who doesn't care who gets hurt, it's well worth a read.

As of chapter 13, the title has been a bit of a misnomer. The supposed villainess has shown up a few times, but there's no indication that she's central to anything except a few subplots, and why things might or might not be easy for her hasn't yet been shown. Likewise for the main character, while his situation is certainly not a good one, the story focuses on the mostly practical actions he takes rather than on the details.

In fact, I would say the story's lack of details is by far it's biggest flaw. So far it's been impossible to tell much about the main character at all. Is he villainous? Cunning? Traumatized? Or just reacting to situations as they come up. The time he spends planning, and the results he hopes to achieve, have all been completely skipped over. Even the gender swapping plotline has only been given a few lines so far, with no indication as to what the character feels about it. His goals so far seem to boil down to 'continue surviving', but even that lacks oomph without more details about the barriers in the way.

All that is negative, but on the positive, the story is well written, easy to get drawn into with some good quality imagery. While the details of the plots may have been skipped, there's a constant sense that there are plots going on under the surface, which gives everything a fun level of tension. So far, all three of the characters who have had a decent amount of page-time have been well explored with complex motivations. It feels like at some point down the line there'll be some ah-ha moments when everything comes together in a way to justify the earlier lack of details, and I for one am looking forward to when it happens!

The Void King. *Monthly Hiatus*
By ShiranuiShukumei
The gods themselves have granted mankind the ability to cultivate, to gather up and unleash Qi as devastating attacks or life-saving healing powers. And yet, in the small village of Green Willows lives an abandoned child, Huang Ying, who was denie
Action Required