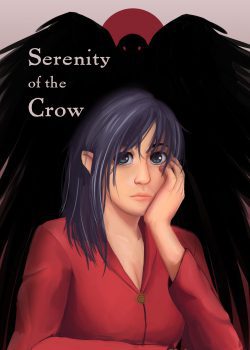 Fena can’t die. To most, this might be considered a blessing. To others, a curse. Fena doesn’t really care what other people call it: for her, it’s reality. She’s content to keep her head down while working for the Mercenary Guild, but a new contract arrives that threatens to drag her back to a past she wants nothing to do with. Haunted by her own thoughts and a crow that never seems to shut up, Fena is caught between confronting her past and preventing it from ever happening again.

Indigo is alone. Her adopted mother is gone, and the witch that never gets her pronouns right is currently the most popular researcher at the Royal Academy. Worse still, she suddenly finds herself with shoes to fill that are so enormous they’re more like a swimming pool, while that same witch flaunts a research project that could get them all killed. With the expectations of her entire sect weighing on her like a lead weight, will Indigo sink or swim? Can she stop the White Witch’s project before it’s too late? Or will the twisted politics of the Royal Academy prove too much?

This is my first published story, so hopefully it goes well! I welcome constructive criticism, and I'd love to hear your thoughts and theories about where the story is headed!

WARNINGS:
This story contains references to depression, anxiety, panic attacks, self-harm, sexual abuse and manipulation. I WILL mark trigger warnings on the chapters that contain such content, but read at your own risk. Additionally there will be plenty of violence and gore but I promise to put it to good use.

This series is also published on RoyalRoad under the same name. Cover art by me.