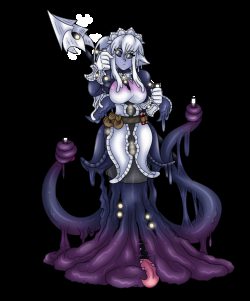 It begins as a usual isekai story.
No, wait. It`s worse. It`s otome isekai. And I`m the villain.
Of course, there must be some kind of cheat to make up for it. It`s that kind of story.
And my cheat is... being a shoggoth. Which apparently includes being a genius with setting up all sorts of production. Because "engineered to be universal labor" backstory for that race, I surmise.
So... Screw it, full steam ahead. Let`s see what I can make out of this world and it`s ikebana-based magic.

Holy sh*t this is isekai gold. Yuri, intelligent main character, interesting world building, it's all there. The power trip is delicious and cooked to perfection. This is going to be a top novel it already has tier 1 waifus. This is gold, literal gold.

And so I wait for the next chapter button once more...

At first, I was skeptical. But then, I was like, "holy sh*t, this is good!" Basically, it's a great story, just keep a dictionary nearby.

Isekai'd Shoggoth tries to be several things at once. Strangely, it succeeds. We have a harem based on consent and mutual respect with some genuine polyamory. We have a well-researched and amusing empire-building based on technological progress. We have serious elements of adventure and political intrigue. And it is rather wholesome without getting naive. Honestly, I never expected this quality on Scribblehub. Go and read it.

There's an old joke in the gay community, "What does a lesbian bring to a second date?  a U-Haul" and both the MC and all the love interests adhere to this as a tenet of faith.  Not only do women jump into the harem almost as soon as they're introduced, the plot also races like an Olympic sprint.  e.g.

MC declares war on another country and basically ends the war with one spell in the next paragraph.  The MC has so many irons in the fire that often 2 or 3 major developments occur at once, like building an entire confectionery chain or introducing high carbon steel within one chapter.  On that note she seems to genuinely be an expert in many areas and very meticulous and hardworking, which makes the plot a real blast!

The blistering pace is fun and adds to the light-hearted tone. There are two things I don't like and one minor gripe.  First, a lot of the 'cute harem/s*x' scenes are repetitive, lots of petting and cuddling and kissing every time and the scenes are pretty frequent and feel the same.  Second, Selene who is supposedly a straight woman, dreams of making out with the MC.  Now, thankfully this hasn't happened a lot so far, but if every character in the novel has their personality bent towards the MC just because OP MC harem novel, that makes those characters more dull.  But most of the characters have ideas and motivations independent of the MC, which is good.

My minor gripe is at least once each chapter there's a sentence that's clearly missing the words "a" or "the".  It only stands out because I haven't seen any other mistakes, but it is fairly common.

That's the bad, now there are two thoroughly enjoyable things about this novel: first, the MC is great.  She has a vast knowledge, knows what she wants and has her own ethics, and acts decisively.  Her flaws are fun too, the possessiveness about her harem intersects with villains without being overplayed into psychopathy.  She's the heart of the novel, which is probably what makes it good since it's almost all written in first-person.

Second, the eldritch theme is overlayed nicely.  It feels like a Shoggoth plot meteor crashed into a regular isekai otome novel and upturned everything in interesting ways.  That scene with Moon near the beginning is especially good, and some later ones.  Really the eldritch is all over the novel and very good.

Lastly, this novel avoids stepping in the pit trap of some yuri/yaoi or harem where all villains are [opposite gender] or all [opposite gender] are villains, and the other trap where all characters are gay and their only personality trait is being in shallow puppy love with the MC.

One of the best here, give it a go!

Why does an Eldritch need to worry about the plot of an otome game they just transmigrated into? They’re an nation killer.

Anyways, the author is prone to info sumps that simultaneously provide too much and too little information. I’m sure there is a good story in the somewhere. If you can tease it out from the almost frenetic text, the  by all means. &Nbsp

The only thing I wanted to point out was that sometimes you seem to forget some words. Like "Rising against legitimate king will be expensive" instead of "Rising against THE legitimate king will be expensive". I don't know if you're a native English speaker, but this is just something to keep in mind, because while your story is very much readable, this will make it even better.

Without a doubt my favorite series on SH. Yuri, legitimate polyamory (rather than a protag who’s just indecisive or oblivious), a unique magic system, hints about interesting monsters... IS hits all my high notes.

For anyone who’s read Maou Shojou, rest assured that the two are distinct. Sure, both feature OP reincarnated lesbian horrors from The Beyond who gather harems of beautiful and powerful wives to corrupt, but that’s about where the similarities end. Where Makoto focuses on combat and conquest, Alyssa’s forte is development and expansion. While the badassery you’d expect from an extradimensional eldritch being does crop up fairly regularly, the main draws are definitely watching as Alyssa slowly puts her tentacles into all the pies and the interactions between our lovable harem mistress, her wives, and the rest.

That said, the last bit is probably my biggest gripe. Most of the non-harem cast have had about 2 scenes of screentime across nearly fifty chapters, which just feels...weird considering the only thing she stands to gain at the Academy (besides a diploma she could probably test her way into right now, just based on her knowledge and achievements) are friends, wives, and connections. And yet, we’ve barely gotten any info on her classes, classmates, budding romances, or escapades (excepting that one time with that one professor). Even the wives seem to be losing agency somewhat. The newest ones I can give a pass, since they’ve explicitly been catching up, studying, and adjusting to their positions, but the original two are starting to feel like they’re either latched onto Alyssa’s side or completely nonexistent, with little in between. Kind of like a bouquet of flowers: each one is beautiful and unique, but though they’re nice when you’re around, they’re not the most... functional additions.

The beginning is a bit rough but it turns into a pretty enjoyable story later on about an eldritch abomination trying to be an OP protagonist without accidentally starting any cults or driving her family irreversibly insane.

The Otome part isn't played up as much and quite a few of the side characters have been developed a bit, which is encouraging to see this early in a web novel.

I gotta say this is a really good novel, especially if you want to improve your vocabulary with rarely used words (really, I searching terms), I can't say the same about grammar though (a LOT of missing "the" amongst other things).

The story is interesting as in she uses her knowledge from her last life to improve a medieval age with magic mixed in, plus an additional fact that she's basically a tentacle abomination from Lovecraft that can shapeshift into a human form.

Also magic has an unique mechanic that's different from other novels, which is everyone (except MC because yes) needs to use flowers to use magic.

Overall it was a nice read, if you can look over the fact that it's not really edited

This is a great story I wish there was more like it :3

Lone Man Among The Elves
By Monk_Origins
A man from the future crash-landed to a planet full of medieval, sword swinging, magic casting elves. And he didn’t have the patience to deal with them. World map(draft): https://ibb.co/T4mTfkL Usual stuff, folks: Fi

Tree of Aeons (an Isekai Story)
By Spaizzer
Story about Matt an OP tree in a fantasy world. Contains timeskips (lots of it), citybuilding/dungeonbuilding…
Action Required