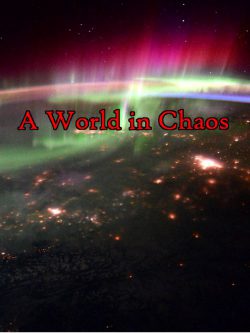 It was supposed to be a regular bus ride home for them. A normal day of returning home from college, but this bus ride will forever change their fates. None of them would ever forget what they saw on that day, an angel and a demon.

But it wasn’t just them, the whole world was in chaos. All over the world, monsters, mutants, aliens, demons, and angels were appearing. Mankind was thrown into chaos as more and more of these beings started to appear.

This is the story of unlikely encounters between humans and these beings.

A World in Chaos is a story about how the modern era slowly begins to change because fantasy-like monsters begin to appear all around the world. The story follows Jude Craven on his journey on how he adapts with his whole world being changed. Jude Craven isn't your ordinary protagonist as he has his own scars and trauma but Jude will grow as he experiences a variety of situations that may or may not put his life in danger. A big focus of this fiction is Jude's interactions with others so there will be some romance, some friendship, but there will also be action.
I've also uploaded this novel on RoyalRoad just to let you guys know. I'll be uploading on Mondays, Wednesdays, Fridays, and maybe on the weekends. I hope you enjoy reading and if you do please support me at patreon.com/SteeLeeL.