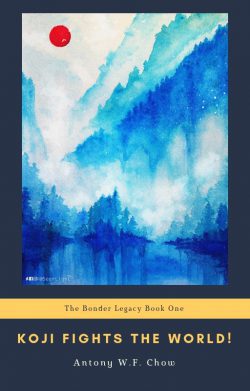 [March 20, 2019 Update: The official, revised version is on pre-order at Amazon, with a publication date of March 22nd. Book One will also be released on Kindle Unlimited. The three chapters here at Scribble Hub are a SAMPLE of the beta version. Thank you for your support!

A practitioner of Dim-Mak, the infamous “Death Touch” martial art, enters another world and leaves a trail of blood in his path!

When 19-year-old college student and Dim-Mak practitioner, Koji Adalwin Becker, is suddenly pulled through a vortex and into an arena, he fights in a 1-on-15 deathmatch. Upon surviving and displaying his incredible fighting skills, Koji is forcibly married to Zelea Sagoisa, the Fourth Princess of the Kingdom of Nephosia, and he becomes her husband and Bonder.

Koji’s status as a martial arts prodigy earns the favor of Daethix Colarte Nephosia, the Third Princess and next Queen of the kingdom; eventually, she declares him to be her fiance and future husband! Thus, begins the legend of Koji in the world of the Four Winds.

Over time, Koji learns more about the northern kingdom and the Bonder Legacy. His elevation to the status of Royal Consort and a member of the Royal Family of Nephosia creates new opportunities and new challenges. To defend his loved ones, his new family, his people, and his kingdom, Koji must fight the world!

KOJI FIGHTS THE WORLD! is a Gamelit Harem Wuxia webserial with isekai elements and geared toward mature readers. It is inspired by Summoned Slaughterer Japanese light novel by Ido Masayoshi, Monster Musume anime show, The Legend of Bruce Lee TV series, and Man of Tai Chi movie. This work contains graphic scenes of martial arts violence, explicit sex, forced marriage, a harem, cursing, and other material that some readers may find objectionable. Reader discretion is advised.

I Became the Overpowered Martial Spirit of a Manhua Protagonist After Creating a Video Game Character
By Mad_King_Zenra
My name is, or WAS Lance Stephenson, I was something of a loser in my world who stayed inside all day playing video games because of a fear I developed of the outside world. I loved reading cultivation series like Apotheosis or Martial Peak where
Action Required