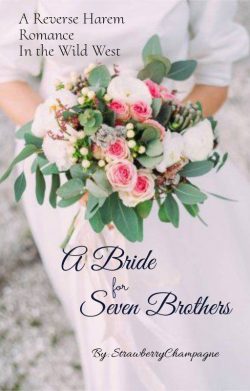 It was late fall of 1872 when Sarah Jane first saw the advertisement: SEVEN BROTHERS SEEK BRIDE, followed by the address to write for more information.
After a full year of courtship by mail she goes west to marry Carter Carter in love with the man whose been writing to her all this time.

What she doesn't realise is she has made a terrible mistake. There is no Carter Carter, only Beau, Daniel, Markus, Silas, Luke, Adam, and Will. The seven brothers who have been writing her together this last year and it's their intention to have one wife, Sarah Jane.

She learns that propriety is different in Last Leg Wyoming, where the Doctor is a Married Lesbian, the Mayor wears Ladies dresses, the Ladies Auxiliary isn't actually auxiliary to anything and half it's members are whores.

Beneath the smiles, and the love in which they shower her, are seven deeply broken men that may help her learn there's more ways to live than that perfect home she dreamed of in Boston.

A Little Bunny Looking at the Moon [BL]
By yansusustories
Elder Baili hadn’t had much luck with his disciples. The first was a martial arts-maniac that didn’t need him to pay any attention, one was a troublemaker that needed him to pay too much attention, the third was a beautiful flower that had other m

Villainess Days
By KaPi
Nadina Hearth, died at the age of 17. Cause: A truck driving out of her TV screen. ——- Then, a ‘goddess’ named Miranda offered to reincarnate her into the world she ruled, and Nadina readily accepted. Some

Cross World Project
By Gerazzza
The protagonist, having lost his parents with no relatives to take care of him and his little sister, was in a dilemma. Having no place to live and unable to get a job to support both him and his sister considering he’s just supposed to star

Lover’s Lifeline System
By Sadistic-Silver-Shinryuu
Welcome to my first novel! you can find my discord here>> https://discord.gg/AKWrwjD Oh and I do have a patreon where you can support me, you get perks as well when do.. >> https://www.patreon.com/join/NSFT? What do Divine
Action Required