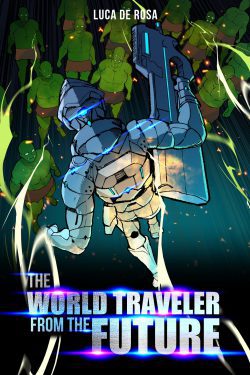 The world, under the guide of the System, was prospering. The Dungeons gifted untold riches to those brave enough to challenge them, and the System watched and helped those who were willing to complete its Quests.

But not Charles. As soon as he appeared inside a dark cave, the system told him that he was an anomaly, that he was not worthy of its gifts.

His mind was damaged. His AI companion was convinced that he was in a world of sword and magic. All around, schemers and manipulators tried to play their part in a story that was thousands of years old. Spanning entire planes and worlds. And yet, he only saw what he wanted to see. For a while, it worked. Slowly, but inevitably, it became impossible. The threat was too big to ignore, the evidence too strong.

He was just a pawn in a game so large that it was impossible to comprehend.

At its center, the System. The System was not what it seemed. It was a tyrant, or maybe just a tool created by someone or something so powerful that it could control entire worlds.

And it had declared him its enemy.

Many thanks to Damiano, who helps with the world building and the character building.

Many thanks to Fuyu Dust for the cover art.

One new chapter every Friday.

Patreon - get early access to chapters weeks before they come out.

Discord - chat with me and other creators.

A great story that blends Sci-fi with fantasy elements!

And let's not forget our alpha MC, who has a mission to accomplish and he ain't about to let no medieval simpleton stop his plan.

I’m Lost Yet I Have A Crafting System
By GenEriko
I, Sino Koe is lost in another world. I don’t where I am nor how I got here but All I know is that I have a crafting interface right in front of my eyes. It’s good that I can make things with ease but sometimes it doesn’t

Reincarnated As An OP Paladin
By CautiousTitan
[This is my first novel ever. You’ve been warned lol]. A 19-year-old college student gets summoned to another world after a peaceful nap in the library! He’s smart, he’s strong, he’s sarcastic, and has the potential t

Lord of Goblins
By DarkWe
His Lordship Arrives. Corruption. Greed. War. Lev is no stranger to the evils of the world, having spent a lifetime fighting the predatory system that ensnared the world’s population and turned them into puppets for the leaders

Black Wing
By tofu_moon
Raven. In a world of fantasy, where magic and sword reign supreme, a girl is reborn. Not as a hero, a villain, or even a common mob. She was reborn as a dumb bird. Now don’t get me wrong, ravens are one of the smartest animals alive. But im

The Reincarnated Vampire Just Wants To Enjoy Her New Life
By Ninetailed_Furball
When my curiosity got the better of me in the afterlife, I ended up reincarnating with several things I wasn’t supposed to have, like my memories. But I got a second chance at life, and I wasn’t going to waste it. Making a nice home in
Action Required