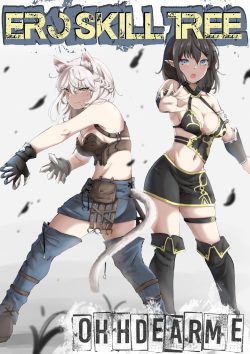 You know the drill right. Summoned to another world? Check. Demon lord that needs defeating? Check. Hot elf girl? Check. Medieval European fantasy setting? Check. Everything seems to be in order here, hold on what is this grayed out section to the skills tree? A hidden custom character skill tree. Wait what is that?

Any comments and feedback much appreciated.

Have you ever played a video game in which you're an action hero, strong and undefeatable? (Aside from those few game overs, but hey, that's what "load game" or "retry" is for)

And then, for the sake of the plot, that game comes up with a cutscene, where you can't control your character and they fail the most basic challenge?

That is this novel.

Further reasons for a low rating can be summed up as "this novel is missing a lot of tags such as rape, dark, Dense Protagonist, Manipulative Characters" and "synopsis didn't match content of novel".

From this point onward, spoilers for chapters 1 through 15.

Our protagonist finds himself summoned in a location by a s*xy elf girl. All nice and dandy, except there's an ogre in the room and he's not so happy to see us.

One fight later, it turns out the protagonist has a "special heal" skill, and is forced to use it to save the elf girl. She gets hot and bothered and ends up jumping him. Our protagonist is too clueless to notice properly what's going on.

Now, I'm going to be a spoilsport here and review it from a legal/moral-ish standpoint. This is not how you're supposed to read novels (I think), but later chapters trigger this way of looking at this story for me. Skip the next 2 paragraphs of this review if you don't care.

The protagonist asks for consent to heal the girl, but it's not like she can reject that (since it's accept or die). The effect is strong enough to make the girl want him NOW within a short period of time, and he's too clueless about how skills work or what this new fancy arousal magic is to stop what's going on.

I don't know how a court would rule if you had s*x with someone as result of trying to administer life-saving medication with side-effects, but I'm gonna say that it's less bad than having the girl dying and so it's okay. Maybe regrettable, but sure.

Once everyone's back to their senses, we go to the guild to get registered, and then to somewhere else to sleep. The elf girl refuses to answer any real questions about the current situation other than the help on the RPG side of things, stating that what happened to the previous people she had summoned was "too fresh and horrible to talk about right now".

Because we're in a cutscene, our character believes that leaving things like this is fine (it's not). The chat ends, and our elf girl leaves our protagonist alone.

Knock knock, it's a cat girl. She's here to help our protagonist train his special abilities. Here's a mana potion (laced with aphrodisiac), now let's have s*x. From that same legal/moral-ish perspective, this is drugging and then rape.

Anyway, there's some stuff about training in a forest next, in which the elf girl pulls the fantasy equivalent of an intercom tutorial ("I'll be behind you, just yell if you need anything, now go find and fight some monsters!"). Thanks for the neglect, you could have at least shown him how to do it first.

After killing a lot of monsters, elf girl and protagonist head back to town. Protagonist gets invited to the elf girl's home, where she ties him to the bed. The cat girl shows up; turns out that she's a friend of the elf girl. The plan? Double rape our protagonist; see whom he likes better, so they can be his designated girlfriend.

Author, I don't know what went through your head there. Maybe you think it's okay because characters will act like characters do. But that's not true. What happens in the story is what you write. And when you write things like this, it's not the characters acting out on their own based on their desires - it's you writing out your desires. And if you want to write some rape fic, that's fine, but for the love of god, please tag it properly so I can ignore it.

But wait, actually our protagonist grows some balls for once and decides to stand his ground and uses his abilities to "fight" back for once, taking control of the situation. They still end up having s*x, but this turns it from rape into "weirdly started s*x" which I'll chalk up to author inexperience. Or character ineptitude. Sometimes people are shy.

Having gained some hope out of that chapter that the story isn't all that bad, I read on.

Turns out our protagonist was practically murdered (though the specifics are left unclear) for summoning purposes. There's a magical relic that will kill our protagonist if destroyed, just in case he decides to slack off. There's supposedly a mitigating factor in that the elf girl had to do it or die herself (either directly by curse or indirectly by unchecked rampaging demon lord and demon army). Okay, fine, I'll forgive the kidnapping, and I sort of understand the slavery (that's what it is!), because summoning someone with special abilities without having a means to ensure their loyalty is not a smart idea.

But. This elf girl didn't explain jack. She's too horrified to explain what happened to her previous abductees, uses her new abductee as personal s*xtoy, is too lazy to explain the situation and gets angry when our protagonist gets assaulted when she leaves him alone.

That elf girl is toxic. The novel is toxic. I'm not going to pull an ad hominem here, though this sentence probably makes one anyway through implications.

Tag your novel correctly. Write your synopsis correctly. Think of what you want your story to be about, and then write your story that way. Right now there's two stories in one - there's the story in which a spoiled/clueless princess elf girl keeps summoning boytoy slaves in order to get rid of her duty to do something about the demon lord. And there's the story about an isekai protagonist with an erotic skill tree checking out a pretty much all-female world. I would very much love to read that last one, but this novel is not a good rendition of that idea.

we need a "wimpy mc" tag for stories like this, the MC here acts like a little boy with some trauma being pushed around, he is devoid of any personality whatsoever

First and foremost, this novel is about an unlucky dude finding himself in a new world and realizing he isn't in the best of situations. There are fun and fluffy moments of course, but most of all the MC isn't one of those OP JP isekai heroes that come along and everyone bows before him and his "innovative food". Instead, here he's in sh*t, and he gradually realizes it. And that's where the journey begins.

Status: chapter eighty-seven: unexpected visit
Apr 7, 2021
I enjoy this novel and here are the reasons

Demon Queened
By Princess_Kay
After flubbing a powerful incantation, meant to give newly coronated Demon Queens the wisdom of their ancestors, Devilla Satanne awakens to memories of her past life as Jacob Divington, a human from Earth. Having gained a new perspective on life,

A Pervert’s World
By Slayer104
Our protagonist gets transmigrated to a free-use world where sex can be bartered for. It’s a world with all kinds of magical beings, from angels to demons and everything in between. Protagonist will have to work hard to keep his little life,

Frameshift
By Pastafarian
Magic. Math. Not a whole lot of context. Two months ago, I was a wormhole navigator, ripping open a hole in the universe to save a ship of people who only vaguely tolerated me. Two weeks ago, long story short, I threaded an impossible path

The Dragon King’s Harem System
By Nanakawaichan
My Patreon page: https://www.patreon.com/nanakawaichan Discord chanel: https://discord.gg/dWeZYYv He was a prostitute who had a simple dream. Living in peace, going to college and getting a good job like an average man of his age. But
Action Required