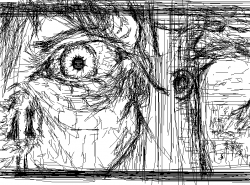 On a small island, separated from the rest of the world, a parasitic infection suddenly falls from the heavens and strikes down half the population within days. The island is quarantined within a week, but was it enough to stop the infection from reaching beyond the island? It doesn't matter for most of the people left on the island as food is getting scarce within the first week leading to looting, burglaries in broad daylight, and the crippling of the local government. It's after the first week that things start to get really strange, at least stranger than just a rampaging parasitic infection killing off almost everyone you know and love. The dead start to rise from their graves, and those who survived the infection start changing into something a little less than human.

The story follows two people as they struggle to survive on the island and find a way off before they either get eaten, mauled, shot or starve to death. Anthony, the tough but shy youngest son trying to find his way in the world, and Jade, the former military recruit that was on shore leave when everything went down.

Author's note: This will be the first written work I'm posting on here. I'll try to update weekly, but no promises as my health isn't in the best place. I really have wanted to share some of the stories stuck inside of my head, and Sunny Island was one of the first stories I've wanted to push out since I thought about writing. I'm a big fan of Post-Apocalyptic scenarios, and this work is vaguely based on how I think it would go down where I live should this situation start here, plus a little something extra, because realistically speaking, no one would survive on this little plot of dirt in the middle of the ocean if it did happen. Kinda want to do a spinoff of this with a more realistic setting and see the drama that unfolds.

(Please Note, this is a work of fiction, and while places and names may coincidentally line up, they in no way represent actual people, organizations, or places. All events, reactions, and possible similarities are fictional in nature and are meant to be viewed through a lens of entertainment and are not to be taken as any kind of moral, religious, or occult compass. Please do not try anything within this story that seems dangerous, consult with an expert if you find something within this story that might be useful to yourself in an actual survival situation as I am only an enthusiast and cannot offer advice for any life-threatening situations.)

(Cover Art is something I threw together in MS Paint, a place holder until I can get my hands on a tablet sometime in the unforeseeable future. Drawing with a mouse is not my favorite thing, nor is it very pretty.)

The Terran Traveller
By ConTroll
A dark, science fantasy tale of a man, Subject 513, sent to another world as an experimental test subject. WARNING: This is not your typical isekai, wish-fulfillment story. You have been warned. In the year 2022, a mass-transit of te

The Girl With The Crimson Eyes
By CrimsonBlob
Remnya is an orphan girl with horns and a destructive power sleeping within her. Oblivious of it, she spends her days protecting her friends at the orphanage. However, when a mysterious lady adopts her, Remnya discovers how valuable her kind truly

Rift’s Lament-America stepped into another world
By BiggusDickus47
In March of 2025, The US government detected an emp signal in the pacific ocean that had been pulsated through Hawaii, luckily it was not strong enough to destroy the electronics in the island, a carrier strike group was dispatched to find and inv

When Immortality Meets Masochism
By KR043
Name: Katie Lockwood. Gender: Female. Profession: Badass. Hobby: Stick my pen into my palm and twist it three turns. Follow the masochist Katie as she slashes and dashes across the Supernatural world and discover her true i
Action Required