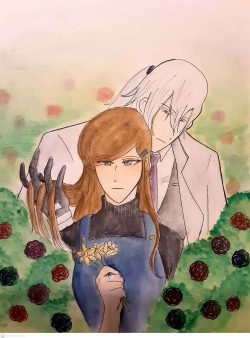 "So this is what I have to go through?" The girl said as the man with Golden-Amber eyes pinned her against the wall.

"In exchange for one of my trusted men's life, you must return the favor with yours. Don't try to avoid this, we both know well what will happen if you don't comply with this marriage." He forcefully lifted the girl's chin up with the girl of his gloved thumb and forefinger.

Lenna Esmond, a normal and "simple" girl living in her home city, Bremerwood. Tales of mafia families are not unusual for her which happens frequently deep within the place. Four regions meant there are also four Godfathers who maintained their own territory. As she was just living her own life, free from the chains of her family's business she encountered a new problem. When she got home from work, an unexpected event had occurred, needing her to accept her reality.

She and her family's presence are needed by the Godfather of an infamous Mafia Family due to someone's mistake. Often to be called by the public as the rulers of the North. What would her life be after the encounter? Is it going to work off well? Or is she going to be found herself in a one between life and death? Maybe if Life itself gave her a chance, to reach out to the person she has tied the knot with?

*The illustrations in this story are all created by me and not somebody else. It's mandatory to picture introductions of the main characters, but not all of them will have it, I'll leave it for you all to imagine what some of them look like. Some scenes are also illustrated, please mind the inconsistent and unproportional drawings.*

There are going to be some chapters that have some slight explicit scenes in them. So I will be tagging those chapters with a *.

A Hunt For Crows
By happyvertigo
New money rich kid. War General. Amnesiac. Most people live one life, Virgil Darko has lived three. It’s been six months after losing his memory and Virgil has only just begun to adjust himself to prison life in Shrieker’s Veil
Action Required