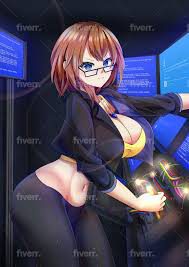 The Action packed adventure of the gorgeous, but evil superhuman agent, Jaakuna Warasaki. Her skills in infiltration and sabotage, coupled with her deadly fighting abilities, make her one of the most dangerous secret mercenaries in the world.
Growing up in a rather rough and tragic environment thanks to her crimeboss father, she joins the evil mercenary organization, Kurai Yohei, as the top agent. However, after stealing top secret blueprints to advanced energy weaponry, she even develops ambitions to take control of not only her own organization, but the entirety of Japan in an effort for revenge on her pops.

The only one who may have a chance to stop her and the organization is her former best friend/private super detective, Naomi. Will Naomi's skills be enough to stop the evil Jaakuna, or will Jaakuna crush and dominate society as we know it?

Inspired by a myriad of anime and other fictional shows/movies. So, while it is not a fanfiction, many readers will probably be able to pick up the similarities and references to other anime. For example, the evil organization, that was inspired by groups like the Akatsuki from Naruto, the Espada from bleach, and the homunculi from Fullmetal Alchemist.

Life, but not as we know it.
By SilverStars
With the sun blinding my eyes and a nice view on the park, it was a very enjoyable winter day. Cold. A blue sky hovered above me, crispy clean. A bush rustled and some small animal scurried away. A spiderweb completely frozen into a very fragile i

Eidolon Rebirth
By Volatis
Magic exists everywhere, except for the unlucky few. The myth known as no-mages, sentenced to a fate worse than slaves. Not even privy to memories of past lives. The pattern of history is meant to break, yet corruption forces a displaced se
Action Required