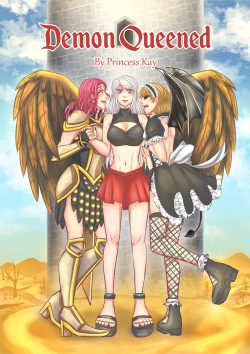 After flubbing a powerful incantation, meant to give newly coronated Demon Queens the wisdom of their ancestors, Devilla Satanne awakens to memories of her past life as Jacob Divington, a human from Earth. Having gained a new perspective on life, she quickly comes to a rather horrifying conclusion: she's been a complete and utter brat! No wonder everyone hates her!

And then there's the fact that she's apparently been reincarnated as the villainess of Tower Conquest, a lesbian porn game with a surprisingly intricate plot. One in which the Heroine conquers Dimona Tower, turning Devilla's people against her in the process. In victory, the Heroine brings about a glorious age of peace between demons and humans for the first time in millennia. ...Which actually sounds pretty good for her people, come to think of it. Devilla knows her terrible behavior is beyond forgiveness, but maybe she can still make up for her past mistakes? She just needs to make sure the events of the game unfold correctly. Though there is one little detail she'd like to change - the part where Devilla herself is killed or enslaved!

This is a story about interpersonal relationships and inner struggles - a mix of comedy and inner drama. It follows a woman who has realized her own mistakes and doesn't think she can ever be forgiven for them, but who's still determined to try and make up for them. Devilla might be powerful, but there are some problems that can't be solved through magic and might alone.

It's worth noting that while this is a reincarnation tale, it's one where the current life's personality remains. Rather than becoming Jacob, Devilla simply learns from his memories and gains a new perspective. As such, no matter how much those memories have helped her change, Devilla feels that the mistakes she's made are hers alone.

I came not expecting much, but I discovered a delightful little story.

Sometimes you want to see people face difficult problems that aren't insurmountable. So far, that's the vibe I'm getting from this.

There are real obstacles, but not an abundance of suffering or angst. You can relate to the characters, and they actually act like people (and this is depressingly uncommon). It ultimately looks like a feel-good story rather than gritty realism, which suits my tastes just fine.

Pros - Fun characters, interesting narrative, hints of a setting that's more complex than you might suspect at first.

Cons - A few scenes seem a bit rushed, and the adult scenes are a little too frequent in earlier chapters, but this could just be personal preference.

Hoping to see more of this.

The story is pretty good. The story flows well and is a fun ready waiting for more. 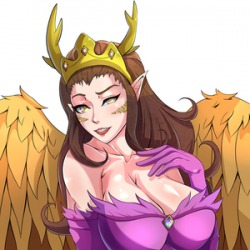 The Hatchling
By Vyria_Durav
Sarric dreamed of dragons all his life; such flights of fancy captured his imagination at a young age and sustained him through a life of struggle at the hands of the cruel hunters that ruled the isolated mountain town of Rivermist. One day, a tru

The Hidden World
By FriendlyDragon
A child traumatized at a young age. An emotionally dead teen now. A youth who has no future, always aiming for mediocrity to stay in the shadows. Entering high school, the child discovers the power that laid within and is dragged into the world no

A Blooming Soul
By Lulla
Adim’s life had as many ups and downs as a roller coaster. The ‘ride’ came to an abrupt stop as his heart broke. After dying, he finds himself in a world straight out of a fantasy novel. He seemed to have lost his humanity, alon
Action Required