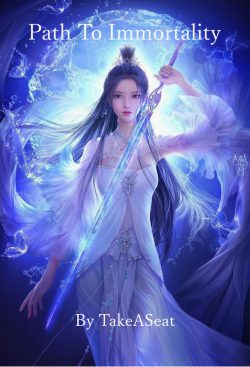 The story of Qian Yu's path to immortality telling the tales of his adventure, hardships, and family he has created over his life!

Synopsis of the story is pretty straightforward from the tags. The start is very slow as I wanted to focus on world/character building and I can't really do anything about that. So if you expect MC to easily slap people and become OP in a couple chapters while having every woman he meets spread her legs, then sorry, that's not going to happen and this isn't your cup of tea.

Although I'm an English native, feel free to put any errors you notice in the comments.

Crazy stuff. No reincarnation? No super power? No hidden grandpa? No OP system? But it's still better than 99% of all other Wuxia novels out there?! Amazing how good a classic Chinese genre can be with solid story telling and relatable characters.

TLDR: Give it a go, I was happily surprised.

I would have rated it 4, if not for the guy that rated it 1 star, if more people review the novel, I will most probably downrank it to 4, but until then, I want more people to read the novel, so I'll give it a 5 for now

Anyway, chapter 75 is the end of the second volume, and I have to say that until now, the novel has been great, the MC feels alive and other characters have a really nice depth to them as well.

The author is developing the world rather nicely, albeit at a slower pace than I expected, at least that's how it feels like, but that's neither a negative nor a positive really, so take that as you will.

Overall, I recommend it and hope that more people would it give  go

Status: chapter 37
Jun 17, 2021
Wow, these reviews are really disingenuous. I normally would rate this as about 3 stars, but I gotta balance these out and there is a few other issues.
.
This story was very disappointing for me. The biggest reason I have rated so low, besides what I said earlier, is that not only does it not live up to the tags that attracted me to the story, such as the harem, smut, R-18, and fighting too of course, but it doesn't even handle the themes it works with well.
.
let's talk about the slavery for instance. I don't mind dark themes and if they're handled well they can be great. This wasn't. The protagonist just doesn't feel like someone you can step in the head space for comfortably without cognitive dissonance or being upset with their choices in a logical manner.
.
There are situations where a decent person would purchase slaves for a good reason and not feel bad about it. Like if those slaves are being mistreated and you plan to help. For a practical person you might have the same reason, but make a deal with them to secure their loyalty and full effort in the future. Things are easier when people feel indebted, dependent, or respect you.
.
This protagonist was okay with slavery from the start without any qualms or considerations of any kind and that was a big part of why I dropped and rated so low, but it wasn't even the only thing.
Minor spoilers:
Spoiler

You see the protagonist needed a partner for dual cultivation and you might think that he would want the highest quality possible in that regard or that the writer had some early harem members planned out for that role. There were even two such women that were introduced and developed for the story, but he writes them out of the plot for stupid reasons and right away the protagonist was earning for his first slave. Stupid and illogical.

[collapse]
.
The protagonist's quite frankly is not typical by modern standards of ethics or common sense. (Not a lot off mind you. He is not a rapist or psychopathic killer enjoying himself.
He's just a smidgen off modern and despite people claiming he is meant to have ancient ideology, he definitely isn't like that.
He's off just enough to make reading this unsatisfying because that and his decision making process will stick in your head and that's not considering the other issues.)
.

I read most of what's available and even ignoring the ethical concerns? The writing just doesn't cut it, man. The narrative structure is not well planned, it invalidates itself in places, throws out characters it developed as I said earlier, the pacing feels like it's just two steps behind where it should be to be truly satisfying, and the syntax is very poor. The scenes feel more like a dry diary at times, the setting and world building are shallow, and both are flat naratively. Locations aren't really described or built up because they likely weren't even thought of and when you picture the scenes they have no spirit to them. Like take M.H. Johnson's The Silver Fox and Western Hero? The cultivator wear Gi, Qipaios, or other period specific stuff that is pointed out tastefully. The architecture is described and even the landscape. I just want to point out, if you didn't know already, but locations, like cities, are characters themselves that need their own character development. Towns here are just that... towns without descriptions of much at all. It's lazy.

For only one chapter..I can tell this will be a good Wuxia style novel.

I'm truly shocked that this novel isn't more popular because it's good, and I mean REALLY good.

Fight scenes so far aren't just "Haha, I'm 2 stages above you, you have no chance at beating me!!!" or two people throwing skills at each other until one of them dies. They don't go on for 10+ chapters of characters just powering up every time they're about to lose. They are pretty quick, and because most abilities can be used in different ways they're fun.

World building is good, though I do have to say that names and descriptions of sects and cities are on a simpler side. (Which I honestly prefer, since remembering them is much easier that way, at least for me)

Harem and romance are REALLY good. So far it's one of the best harems i've ever read, and trust me i've read a lot. Harem members actually interact between each other, and it seems like later on they'll even go on adventure by themselves, without MC.

MC cares about his women, notices when they're in a bad mood and tries to make them feel better, actually has character, and is a really likeable person.

Smut and R-18 stuff is quite nice. Scenes aren't rushed, they don't feel out of place, and there's always a decent build-up before them. The only problem is that there aren't many of them, but there will be more later on.

A Gamer and the Cursed Goddess of Karma
By Edenstone47
Victor was your normal everyday hardcore gamer who loved to play RPG’s. The newest RPG to hit the market, The Reborn of Ceru, was one of the ways that the goddesses of the world brought excitement and entertainment to their world. It was m

Beasts Under Your Bed
By LillyanaKabal
(OOC is serious business; nobody in this book is explicitly autistic. But I am, so there are going to be some showcases of that here and there throughout the book. Hence the tag) The Beasts From Beyond, an ever-present threat of elderich ab
Action Required