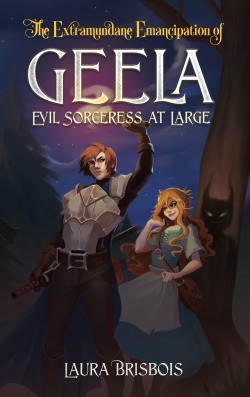 Darkos, holy priest of Alerion, the God of Peace and Healing, has just arrived at the castle of the Evil, Dark Sorceress, backed by his trusty, if clumsy, companion, Geela. They fling open the doors to find the place dusty and decrepit.

"Oh dear, this place is showing its age," Geela sighs.

And with those words, everything Darkos knew about his friend is turned on its head. Geela, far from a naive farm girl, is a 70-year-old Dark Mistress, hell-bent on exacting revenge on her ex-husband Barney for cheating on her, trashing her place, and changing the locks.

Geela is everything Darkos has sworn to defeat. A bastion of dastardly deeds. A pinnacle of evil...

...so of course he finds himself tagging along.

First off I read much of this story over on Royal Road where it has been on going for some time.

The synopsis captures the tone of the story quite well. It is filled with quite a bit of humor as the duo goes on their journey.

It sort of feels like what you get when a bunch of people are roleplaying together and they are more worried about having fun than min-maxing to create the ultimate war machine. I mean sure they are trying to complete their mission, but it involves more getting eaten by frogs and being mistaken for the contact in a drug deal.

The so called evil witch isn't actually that evil, just amoral. She doesn't really do that much unless someone provokes her, or she needs something (like that time she needed some opals so she took an entire mountain that was rich with the gem. And yes she took literally the whole mountain at once).

Also she has a great flair for the dramatic and knows how to put on a good show. Expect her to have an outfit and a plan to appear as anything she needs.

Darkos starts off as a typical white knight with more zeal to do good than sense. Over time he learns to be less naive and to actually use his head. He isn't the sharpest tool in the shed, but he does make an effort to improve.

The journey the two go on actually has a purpose to it beyond the petty reasons that start it. So there is actual plot to go with the humor.

The world is slowly built over time, and is well done. It avoids some of the overused tropes which makes it a nice change of pace.

The writing and grammar are well done and easy to understand. It is fairly professionally done, which is always nice.

If you enjoy humor, fantasy, and characters that don't fit the standard mold, then this is a story for you!

Warning! This story contains an ass and he plays a role beyond just carrying the party's luggage!

The Characters have actual personalities and are a delight to follow. The author also puts in a multitude of little Easter egg like references into the story that are just a joy to discover, usually it’s not even to ham fisted. As of chapt 52 I have also been able to enjoy actual foreshadowing in the story. The best foreshadowing, in fact, that I’ve ever seen from a non professionally published work. To top it all off, the setting may be fantasy but the characters just make sense. They feel real to me, some characters in these novels  seem too perfect or too ridiculous. Geela and Darkos are neither and therefore are both and more to me.

A hilarious tale about two unliking companions teaming up to go on an adventure.  Darkos is a sheltered holy priest who has a lot to learn about the world and himself, and Geela is an eccentric evil sorceress, with many costume changes and emphasis on appearances. These characters are highly entertaining, and you will grow to love them as the story unfolds. This story will have you laughing while you try to guess what will happen next.

Eldritch nanny
By LORD_SHAXX
An abomination from the void is now working as a nanny. What could go wrong?

Makai, The Land of Change (Collection)
By Kaosubaloo
Originally written between 2016 and 2017. This is a collection of short stories, character skits and in-character articles. Short stories will be noted by sharing a title. Skits are marked as MCS (Makai Character Skit) and the Newspaper sec

A romantic comedy with a ghost girl.- It is never too late to start over.
By AngelPikas
Saik is an expressionless boy who can see ghosts. Yuki is a ghost girl who has always been alone and has never had any friends. Saik dreams of being the perfect boy his mother dreamed of having and Yuki wants to have friends. Working together, the

I saved a s*x slave and she will be my new friend.
By AngelPikas
After defeating the Demon King, the only thing I want is to live a quiet life. A normal life… Although it’s harder than I thought. My dream is to have a girlfriend and have friends. As long as I manage to fulfill one of those dreams, I

Reincarnated Into Two Bodies
By Zinless
After falling to his death, he wakes up with two bodies?! Reincarnated as both a commoner boy and a young noble girl, our protagonist enjoys their new chance in life with two different perspectives. Although they only wanted to live peacefu
Action Required