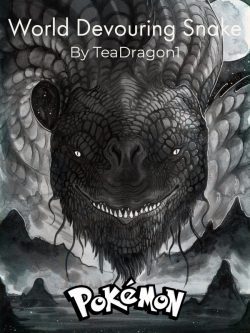 This isn't good. By any metric. But let's give a more detailed review.

We see the world through the eyes of an ekans (our reincarnated m.c.). Upon hatching, its been a constant slaughterfest without any goal other than some vague notion of returning home. No steps have been accomplished towards said goal, yet let's be real. This is another universe. Dudes not ever making it home.

It's supposed to be a pokemon fanfic but other than the pokemon, I fail to see how. It's more of a bad xianxia. Like, really bad. Everyone has tiers and levels. Formula for fights is whoever has the higher tier/level wins. Except for our m.c. He gets to break those rules cuz plot armor. All pokemon are carnivorous. Even lil buneary's. Because that makes for some solid world building. Furthermore, pokemon rarely eat because they're hungry but do so to "level up". Therefore, stomachs are literally bottomless pits. Pokemon moves are for the no name scrubs in this world. Our m.c. Gets the unbeatable power of "I-M-A-G-I-N-A-T-I-O-N". Seriously, an uncountable amount of moves in the poke world and he uses some vague "spirit power" to do everything. He's a poison type that's used poison once.

SUMMARY: This novel is perfect for scribblehub, home of countless God awful stories. If you're a stat whore, you'll likely enjoy this story. But if you're interested in plot, or a pokemon fic, move on. This doesn't do either any justice.

For the author: There's a lot that needs to be worked on, but let's focus on one. Try writing as if actions have consequences. For example; the ant queen sends her guards out to hunt the m.c., not to guard her or get food.  The consequences are she has less resources to lay eggs, she's vulnerable, more creatures are growing stronger since she's not overhunting the area by choosing to target Mr snake, etc. See what I mean? There's a chain reaction there. Now imagine this. What happens to an ecosystem with zero herbivores?

That's the toughest part reading your story. Its a webnovel, most of us are used to poor grammar/plots. Whats hard to get used to is a world without consequence. Because why should I care about it? Clearly nothing matters, right? Thoughts like that completely break immersion. A little consequence goes a long way.

There is good character development in it as well

It also depicts the cruel nature of the wilderness really well.

It's not for those who want to see bright fun Pokemon adventures though.

Overall a good read and something I personally reccomend.

Finn Cambridge…Pokémon Master?
By Overload
Waking up in a Pokemon world is any 10-year-olds dream…Not so much for an 18-year-old. Don’t get me wrong, I love the Pokemon games and even still play the new ones occasionally, but it is not my entire life like it was when I was a ki

Reborn as a Villain in Tales of Demons and Gods
By FanDaoist
MC reincarnated in TDG world as Shen Yue, the evil fiance of the city lord’s daughter, Yi Zi Yun. He tried to think of ways to survive in this world as he uses his future knowledge of his family’s ruin. You can read advance chapt

Rotten Purity: A MHA Fanfic
By C.Sunlight
(Villain Deku; My Hero Academia Fanfic) Think to yourself, just this one little question- “What if the Sludge Villain never got away?” (When a bottle doesn’t drop to the floor, a world is changed forevermore)
Action Required