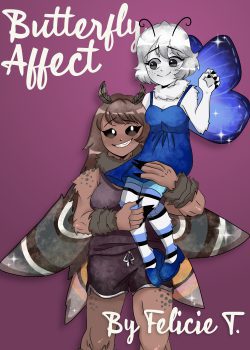 As the world is shook by the advent of the first Morphic Waves, a young man with a differently wired brain than most wakes up in the body of a woman with butterfly wings. Anxious and lost, they must make do with the support of their best friend and roommate to navigate the unfamiliar waters of their identity.

Content warning: This story contains two characters heavily uninformed on the intricacies and terminology of transgender discussion.
Expect some conflations of words like sex and gender, potentially upsetting wordings in dialogue and thoughts, subconscious enforcing of pronouns based on sex, and a general lack of knowledge on the topic coming from them.

This story is set in @SixArmedSweater's Morphic Korps setting -- but you don't need to know anything about it! It is set very early on in the timeline, and the Korps don't show up until 20 years later. This story is also integrally SFW, and is meant to work as a standalone.

A short but lovely story about a trans girl discovering herself, and a world that decided to fight back!