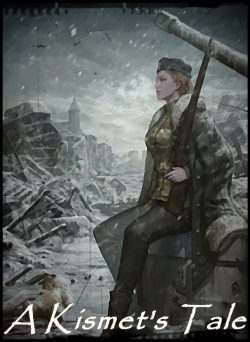 Status: Completed
「 After seven years away from home, Mavin Tomas, after a long fight in the trenches and battlefields had finally left his service. Sending a soldier home back to his beloved to confirm something. Mavin was relieved to find out that the memories that he had of a strange world could still be changed. Seeing such change, he had decided to go against the tragedy that would later spark another war between the 108th nobles of the Athesian Empire, which would divide the weakened Empire.」

--Cover Art isn't mine, and rightfully belongs to its rightful owners.

There are a lot of trash stories on this site which irritate me to no end. But there are some hidden gems which make up for all the other stupid stuff. This story is one of the hidden gems.

The chapters are long and the characters are super interesting. The story just hooks you and doesn't let you go. The MC and the FMC are both war veterans and super cool characters with rich personalities. The side characters aren't just for show and have their character fleshed out properly.

I can't talk more without giving any spoilers and I don't wish to do that so I'll just say this - Go read this right now!!! (We have yanderes)

Decent story that's bogged down by the increasingly worse grammar. It was ok in the beginning but the further I read, the harder it is to enjoy the prose and especially the dialogue parts that can get pretty awkward and hard to parse.

The story also goes off on frequent, long and only vaguely related exposition tangents that ruin the pace of the main story. I really don't care about delving deep into the lives of minor secondary characters, or the history of the world that's barely related to the main story. The characters are decent but they're pretty two dimensional right now. Perhaps that improves going forward but I'm thinking I'll drop the story here due to grammar and pacing issues.

Thank you for your efforts author. It is a well written and loveable novel. Good work keep it up. I have question though is pov's changes will happen frequently as I hate pov's changes no offence it is not just my preference.

It is a fantastic story. It is definitely worth reading. However the tragedy tag is not for show. So it's not a feel good story. I had to fight not to cry at the end of book 2.

The setting is at first glance akin to post ww1 where the two main characters are veterans returning home. They are both flawed people who tries to find the strength to carry on. Even so they are powerfull and possess the ability to challenge their fate.

As the story goes on more fantastic elements of the world gets revealed both literal magic and good world building.

The drawbacks of the story is imperfect grammar and it would help a lot with a map of the world since it gets a bit hard to track all the places.

All in all worth a read.

It's funny how good this story is and how little attention it has received. I get it, you need a heavy stomach to get pass the daunting atmosphere, but once you "conquer" the mood, you discover an intriguing story about a selfless, realistic but also of a broken "hero"!

I think there are a lot of things and teachings, hidden in plain sight in this "otome" world xD

I really hope this story gets finished, but no matter the ending I am already satisfied!

I admit that I have been rather put-off by the author's exposition dump at the beginning, but let me tell you, so far, this has been a wonderful story. The latest chapter had my heart aching! I REALLY really like the friendship between Kohl  and the MC. There's just something about their relationship that makes it wholesome DESPITE Kohl appearing only in one chapter. Kohl is this person that truly changed the MC. The MC, is revealed to be a rather apathetic, mission-driven before meeting Kohl.  It's because of his meeting with Kohl  and through meeting Kohl that he had somewhat changed. However, it isn't always easy for our MC since he have a rather yandere companion who he met during the war, which we later learned tobe the final bossthat our MC was remembering in his memories. Their relationship is quite confusing, but you can kind of understand why a woman like Natalya would fall hard for Mavin who she considers her light after what she later on would go through. The story can be confusing, but there are parts which kinda made sense since it is always mentioned how the MC spend years preparing for the final boss and the post-game boss of the story. The MC is proactive, and he is shown to prepare for what was coming, and has always been ready for whatever was coming and doesn't shy from hurting himself. The grammar doesn't really bother me that much, but there are sentences which makes this hard to read.

I hope the author can continue!