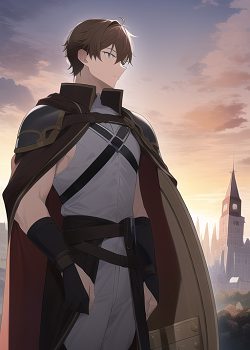 A lot of people think about how they'd go about exploiting a system if they got transported into a game-like world. Others wish that they'd get transported to another world with a cheat and steamroll everything while living out their wildest dreams.

What I *can* say as that I sure as hell never expected to actually get tossed into that situation myself.

Dammit. I knew I shouldn't have written those LitRPG system notes... And what's the point of getting cheats if everyone has one and it's still just barely enough to get by?

Hopefully reading all those web novels in the past is enough to keep myself alive until I can figure out how the hell I got here...
---
A self-indulgent LitRPG I'm writing to get out of my system and warm up for my main story. Self-insert, though with certain traits magnified and others minimized.

I'll try not to make it a complete power trip... maybe. :shrug: This is an amazing story. The moment this became similar to Omniscient reader's viewpoint only made me want to read it even more. There is also the fact that he isn't the only cheat around (though, of course his cheats are game breaking when the conditions are met so in a way he is OP). I especially like the fact that there is one main female lead (though I am a fan of harem, having one love interest is better when it is done properly). I suggest reading this to anyone who likes reading ORV or SCOG, and also for those who would like to see some comedic banter with Vain, the fMC and the various constellations that mess around.

It took me a while to realize it, but apparently there's quite a few references to his previous works? It takes away a fair bit from the reading from a beginner's standpoint.

Also, it's pretty much 95% wish fulfillment.

It's one thing to be told you're not that strong compared to the other guys... but when you're literally breaking reality and rewriting it with your own 'lolnou' version multiple times a chapter sometimes? Against literal gods? And you get the girl pretty much within the hour you're alone with her first? And you're getting the personal attention and praise of multiple gods/ higher beings? And when the system itself becomes a tsundere for you?

Well.. no. The protagonist is hideously overpowered, with a will of steel and unbreakable morals, and yet somehow tries to tell us he's not really that much. No. Super normal dude.

BUTT.... (and I know mine looks good), this one is really good got hooked within the first chapters, even I don't know a way to describe how good it is without doing it justice so go ahead and read it and I'm sure you will enjoy it

This story is really fun and flows well. He Who Fights With Monsters
By Shirtaloon
Access the discord here: https://discord.gg/CDV5SqM Book 8 starts at chapter 527. Earlier books available on Amazon: https://www.amazon.com/gp/product/B08WF8SB71 Jason wakes up in a mysterious world of magic and monsters.

An Unbound Soul
By cathfach
When Peter suffers a too-close encounter with a truck, he finds himself reborn in another world. At first glance it is a perfect fantasy land. There’s magic to play with, elves singing in the forest and a hyperactive catgirl neighbour. There

The Young Master in the Shadows
By Akaichi
He has returned to the past. And this time he will live up to his role as a young master, which he lost in the past. He will use all the resources of his family to his advantage. He will cheat the world itself. This is a harem and intr
Action Required