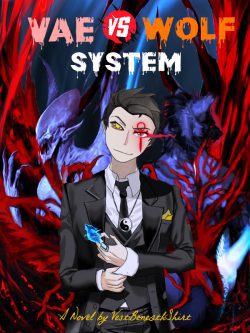 Textbook Definition of a Vaewolf; Hybrid, of Vampire and Werewolf.

When the FAE, creatures of fantasy and long-lost history, rushed out of the depths of the earth, sick of how humanity had destroyed the world, no one had expected it.

Unable to contend against their magic and advanced technology, Humanity was soon on the verge of extinction. Until, one ambitious man, invented the Fae Serums.

And thus, a new world of Fae Humans was born.

Miles Lykaon was meant to live a life of absolute comfort and power, as the next heir to Lykaon Industries. But when he was still a child, his parents passed away.

Even with his Butler/Guardian watching over him, in order to protect what his parents had left, he was forced to grow older beyond his age.

But he failed, and his inheritance fell into other hands.

Until one fateful night, when two mysterious strangers, monsters, crashed into his home.

He was meant to die, but a ghost saved his life, sacrificing the two monsters in his place.

When Miles woke up, he had been granted a mysterious system, with a strange feature called forms.

And so begins the Legend of the Vaewolf, the Lord of Blood and Shadow, the Huntsman of the Wild.

Discord Server: https://discord.gg/sPEJKm9
Cover Art: Drawn and Designed by Yours Truly. So expect more art drawn by myself.
Updates: I will do my best to update daily.

This story is inspired by the glitch in Skyrim, and the general coolness of the idea.

The Stained Tower
By Tilted_Axis
[A LitRPG hybrid for those looking for something unique, yet familiar.] The soul seeks eternity. The consciousness seeks existence. The body seeks exemption. Now an eerie and spectral existence, in an era centuries ahead

[FRONTIER ONLINE]
By Zelthias
Why can’t it work that way? In an era of VR gaming, the latest software allows the game to learn, to grow. Frontier Online is the first VR game to enable players to invent or modify their own skills. Enchanted by the idea, Ryan

Dungeon’s Path
By Akhier
The only places I have posted the story and allow it to exist are on RoyalRoad, Scribblehub, and my Patreon. So the world ended. Whoopsie? We didn’t even see it coming. Quite literally as it came at us faster than the speed of light. Don’t
Action Required