*Tap tap*
"Is this thing on? Oh, great. Hey there, kiddos! How ya doing? Doing well I hope. Alright, let's get down to business. You see, right now there's some kind of massive thirty meter tall eldritch monstrosity trying to bore its way into my friend's ass, and I'm contemplating whether to watch, leave and scream for help, or join in the fun. Seriously though, Hells really fucked up this time, huh?"
*Sound of popcorn crunching*
"Ah, yeah, really fucked up. Oh fuck, do you think that will fit in him?"
*Awkward coughing*
"Rest in pieces, Hells asshole."
*Poorly hidden snickering*

(A/N) Alright people, here it is. So, let me tell you what exactly this story is. Two of my friends and myself are going to be working on this story together, and it's essentially just a bunch of random scenarios and stories that we place our super op godly characters in. This is essentially completely wish fulfillment, and there will be sex scenes(probably a lot), and a lot of kinks will be explored. Chapters will have a name(if we can think of one) and then what character's perspective it is, and I'll try to remember to put any kinks that are shown in the chapter in the chapter title or at the beginning of said chapter. I think I'll also put the scenes in spoiler boxes, not sure. This story is going to be all over the place, and it's just me and my two bros fucking around with each other, so don't expect a consistent release or anything. I hope you enjoy the (un)godly tomfoolery that follows.
-Darke
(Cover image was created with Charat)
++++++++++++++++++++++++++++++++++++++++++++++++++
-Brought to you by:
Darke, the Ultimate Wankmaster and the Misplaced Hentai Protagonist (DarkeReises) 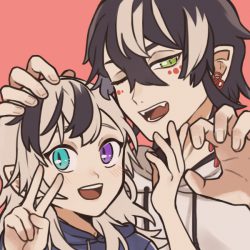 Reject humanity become monkey(ON revision)
By Ozei
A strange rumor going around on the internet. An isekai help association? Stop kidding me who would be tricked by this, certainly if you have to pay money… What! It is free?! Well, I guess I should try it…&#
Action Required