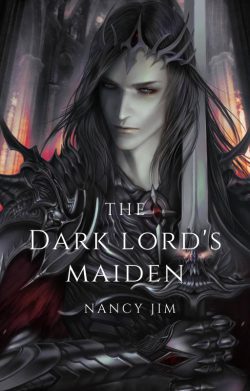 **No Rape**
“Sit!”
She knew right not to disobey the marching order of the one who had spoken. The aura that accompanied his presence was forever pitch-black; too dark for anyone to commune with.
Still, she found the courage to speak.
“Wh-what do you want to do with me?” She protested. But, a grim silence was all it was, as though she spoke to no one.
One by one, he started undoing the laces of her corset, as she sat beside him, on the majestic bed.
'Oh Lord, is it going to happen already? And with the devil himself?'
At that instant, she cringed. The dark lord felt spited even though it pleased him that he frightened her. But who was she to question him? Fiercely, he stood up and faced her directly.
Instantly, every ounce of courage deserted her as he stared into her timid soul with his tiger-intense dark eyes that frightened her rather than made her feel safe.
“I have no interest in your lowly unattractive body. If those are the foolish thoughts flying around your tiny skull, you would be damned to imagine such. I have met far more beautiful maidens. Now, will you keep still?”
'Lowly body? Me? Elizabeth?'
“If I were so lowly to the king, why then did you bring me here?” The words escaped the parting of her strawberry soft lips before she could refrain herself.
He knew that she was far from being unattractive. The fact that the balls within her sockets with which she looked at him audaciously, sparkled like two beryl-green jewels melted onto snow, reminded him just how much he craved her.
Still, he had a reputation to protect, and not even a woman could render him weak.
“You were sold to me, in case you forgot already. Maidens do not question their masters. More so, the maiden to the king of Aegremonth.” He reasoned hard and changed his mind.
“Your company disgusts me, Elizabeth. I would have someone do the job instead.”
.
.
.
This book is a slow-burn book. If you like the story do well to support it.
It would have several volumes.
Volume 1- Trapped in the darkness/Royal Conflict
Volume 2- The Princess from long ago
Volume 3- Kingdom Rivalry
Volume 4- Happily Never After

Cover photo:Credit to the rightful owner. I got it from Pinterest

Genre
FantasyHistoricalMysteryRomance
Tags
Fantasy Creatures First Love Possession Royalty Slow Romance
Show
Table of Contents
Write a Review
Reset Filters
X
Write a Review
You must be logged in to rate and post a review. Register an account to get started.

Transmigration To My Hated Novel
By tayswift679
Synopsis: Disclaimer: The story is my original work and english is my second language which might compose of misspelled words and wrong grammar. The story is full of fiction and any similarities to an event is just coincidence. Elis
Action Required