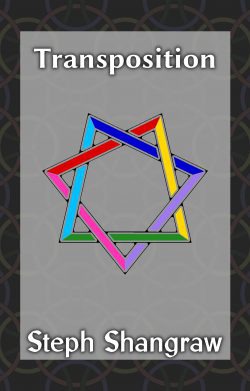 During a blackout, a frail and ragged old woman stops to ask for a glass of water from a backyard barbecue party. Given a good supper instead, she looks around the group, and tells them, "Be who and what you truly are."

Days later, seven of the people from the barbecue find themselves drawn into a trap laid by a pair of wizards and their accomplices, who kidnap them into a bubble reality.

All seven, who have known each other all their lives, are informed that they are not in fact entirely human: they have active fae blood, due to a series of conditions culminating with the blessing of the elderly fae woman.

The transformation into fae form comes as a shock: all seven, whether originally female or male, find themselves now unreasonably beautiful women. More urgent even than that, though, is their captivity. Getting back to the real world is a higher priority than this metamorphosis that rapidly begins to feel natural... but this is only the first step, as the diverse types of fae blood they carry begin to surface.

With no resources except themselves, how can they escape this prison? If they succeed, how can they possibly reclaim their lives? Just how many other faelings have been kidnapped, anyway, and what happened to them? And is there a way to make sure that their captors never put anyone else through this?

Back in the real world, Kayla, who learned long ago to trust her gut instincts, is absolutely certain that something is very wrong. The pattern in the list of missing friends is easy to spot, but makes no sense at all. Then a young woman turns up at the backyard gate who knows more than she should, and even though her explanation makes even less sense, every instinct tells Kayla that Riley is her only way to get them back. If they're not quite what they were, well, that's a bridge to cross later...

Just a little note: I'm a big believer in endings that are upbeat but not candy-coated, and not a fan of grim-and-gritty or of glamorized violence. These are adults in a difficult situation. However, no one gets raped, and the physical violence is, all things considered, fairly minimal. There is some harassment, sexual and otherwise, and also some mild restraint and mild verbal abuse. Complicating factors are generally wizardly or fae in nature.

If I need to warn you about gender in this being all over the map, some of it reality-based rather than fantasy-based, highly diverse sexuality, or that there is (especially later) some indirect fetish/BDSM imagery and honest character discussion, then you probably should just avoid everything I write. :-)

Serenity of the Crow
By Niame
Fena can’t die. To most, this might be considered a blessing. To others, a curse. Fena doesn’t really care what other people call it: for her, it’s reality. She’s content to keep her head down while working for the Mercenary Guild, but a new contr

A Deal with the Devil?!
By Eros
Magic is real. Eighteen years ago magic was unleashed into the world and when it did all the people in it changed. Some mutated into cross breeds or monsters, others gained super powers, while others could summon demons from another realm. Everybo

The Fake Demon Lord
By celestialkey
Lapis Lazuli Fardom, the current Demon Lord, is betrayed by her council when they establish a treaty with the Humans behind her back. Having framed many evil deeds against her, both the Humans and Demons set up an ambush to kill Lapis off.

Anything For The Villainess
By bananapink
As a standard villainess in an amateur romantic fantasy novel, one must have prestigious background to grind people underfoot, a stunning appearance yet no one admires, a proverbial horrid personality only a mother would love and of course, a head
Action Required