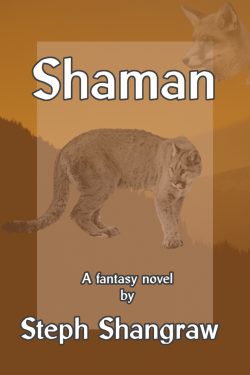 A human shaman and healer returns from several years with the mysterious shyani, accompanied by her shapeshifting puma best friend. A valued friend, from her previous identity as a male student physician, has acquired an old shyani book, and extremists will not tolerate its presence in human hands. But back in human lands, the question arises: which world does she belong in?

Generations ago, human explorers found a continent inhabited by an utterly alien culture of shapeshifting weyres and the shyani, humanoids who prefer dusk and dawn. A truce of sorts was eventually reached: humans claimed the rich lowlands, and the shyani and weyres retain the highlands. Along the border, practicality often rules, but on either side, old grudges linger in some hearts.

As a student physician, Corin tried to take his own life, unable to bear the countless tiny wounds inflicted over twenty-one years of lying to himself in order to be, or pretend to be, socially acceptable. At the last improbable instant, intervention came, in the form of a spirit fox, who led him away from the existence he’d known in the lowlands and into the highlands. There, a puma weyre rescued him, and a shyani shaman helped him find his true self and offered a rebirth, a life with no more lies, and an important role to fill.

Now a shaman and healer in her own right, Vixen who was once Corin learns that the one human who mattered to her in her previous life, then a fellow University student, has come into possession of an old shyani book, and the more fanatical shyani and weyres will stop at nothing to reclaim it and punish Jared. Even though it means going back into the lowlands and facing Jared as a woman, she can’t bear to just look the other way. This should be a short visit, just long enough to see the book into the proper hands and make sure Jared will not be killed for having it, and then she can return to the shyani community that has accepted her as their shaman. And, of course, her feline best friend Dayr insists on coming with her.

But Jared is now a Lord, with considerable wealth and power, and his response to her presence isn’t one she expected. After years living with the shyani, she sees everything around her from a new perspective, and that makes it difficult to keep to the plan of making as few waves as possible. As an honoured guest in a highborn house, with only Jared aware that she has ever been anyone else, Vixen finds herself questioning where she belongs: with Dayr and the shyani, who accept her gender without question but have to make allowances for her differences, or with humans, in the culture she grew up in even though her past would mean a major scandal?

*** Trigger warning: there are scenes of Vixen's previous life, which include some difficult moments and culminate in an (obviously unsuccessful) attempt at suicide before she finds her true self and a better life. Please be careful! ***

Black Wolf
By Prysmcat
So what happens if you feel like you belong nowhere… then find out you do belong somewhere… and that place should be impossible? There’s no such thing as magic or werewolves, especially only a few hundred miles north of Toronto, right?

Yin-Yang
By Prysmcat
Mages in North America seem to have it all – typically from well-off families, and able to manipulate their environment in ways most of the world would never believe. They don’t even have to bother with the mundane details of life like housework,
Action Required