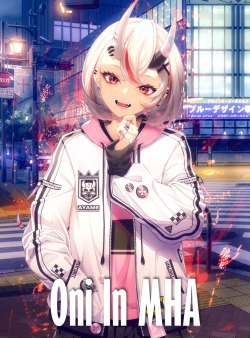 Ayame, a genius at fighting, an heir to a big yakuza family died when her residence was raided by a rival yakuza family.

Got a chance by meeting ROB and granted 3 wish she choose to reincarnated at her favorite anime My Hero Academia.

[Semi OP] [Yuri, I want to try romance but expect a slow-paced one for romance][No Harem !!][ Expect Slight AU ]

Disclaimer :
I do not own MHA, Nakiri Ayame, or Cover image
The author only own the idea and OC

Warning :
- I only released this fanfic at webnovel.com and scribblehub. (Still on submission on Royal Road waiting for Approval with the same Pen Name) If you read it somewhere else, then that is another person, please inbox me if you found it.

5 reasons why this novel is awesome:

If I had one complaint it would be that the story's pacing is a little too fast...
We went through so many of the important events in not even 30 chapters.
Starting chapter 28 it felt like it was slowing down a little but if it keeps the rhythm it had until then, the story will catch up to the anime before the 100 chapters mark.
Actually, it might even go beyond and force the author to catch up with the manga.
I do think that the author should try to focus a little more on the characters' interactions since right now Nakiri barely feels like a member of the class... I mean, even Mineta had more interaction, albeit mostly bad, with his classmates...
Some people said that she's too op hut honestly while she is really strong for a new student, unless she once again gets some huge power boost, she won't even be a match for future Shigaraki.
Which is good, that's the point of his transformation and would serve as a good reminder that she's not invincible.
But right now she can most likely fly through most opponents until maybe Overhaul (or Stain).
I'm gonna assume that Todoroki will most likely cause her some problem at the school festival if he goes full strength but aside from him, only top pro heroes could beat her at this point, she never went full strength too...
Here is to hoping that the author doesn't ruin the story with some stupid sudden choice like a random Harem that makes no sense ! We dodged a bullet a few chapters ago by voting out another romantic interest which is nice.
I don't hate harem, but I don't hate them on cliche, fanservice ecchi, with barely any story, mangas and animes. Harem are just pointless on actual stories wit interesting characters and development.
I'll give it 5 stars for now, if it reaches 100 chapters I'll update my review.

A little too early to judge but so far pretty good

The MC is likable and doesn't come off as too irritating. The MC knows what she wants but doesn't push it and just feels like a relatively regular kid.

She is definitely OP and basically immortal with seemingly little room to grow in strength (because she seems to have already trained and I can't see 'being an Oni' as having much of a power curve but I may get corrected). The drama focuses more on her family and friends which I have no complaints about

A lot of potential especially if author leans into AFO being interested in her 'quirk' with some sweet possible plot twists. Or her mafia family background, could be interesting once story reaches Chisaki like him being a family friend and her trying to save him or something

Calamity In One Punch Man World
By al.shiro
Where am I?… Wait, who’s that kid with the weird chin… also, who’s that handsome man covered in a strange liquid… wait a minute… SAITAMA?!! DID I JUST REINCARNATED INTO OPM WORLD AS A MONSTER?!! Disclaime

Fates Parallel (A Xianxia/Wuxia Inspired Cultivation Story)
By DarkTechnomancer
After centuries of endless wars, the three greatest nations of the continent have come together in peace. As a symbol of their cooperation, they have worked together to establish the Grand Academy of Spiritual, Martial, and Arcane Arts, a place wh
Action Required