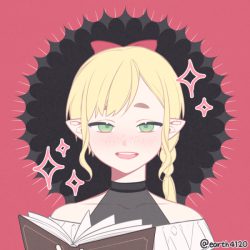 A redneck, from Earth. He was going to go to Georgia Tech, to study and become an engineer. After celebrating his acceptance (with a little underage drinking), he picks up a hitchhiker and crashes his truck. She turns out to be a goddess, and she resurrects him in a fantasy world to repay his kindness and make up for his death. He takes it pretty well, all things considered, finding the new world a pleasant and peaceful existence. Even if there were terms and conditions to his resurrection  he's only dimly aware of.

Jack Roebuck goes by the name of Buck. Or Bucky. He like fishing, the outdoors, and beautiful women. He's modest, humble to a fault, good-natured, hard working and easy-going. He speaks his mind for both the good or ill it gets him into, and if there's a problem he won't hesitate to fix it, or find someone who can fix it. He's steady as they come and rarely ill-tempered. In a lot of ways he's a very traditional man and in a lot of ways he's UNLIKE the other champions Ziva has sent before.

The only person he has real issues with his Ziva, the tricky goddess who sent him to his new world. She goes against almost all his sensibilities, and when she isn't trying to fluster him, the two quickly get into bickering.

Buck has a soft spot for Alexandra, the farmer's daughter he lives with. Unlike every other man in the village, he's utterly fascinated by her magic and unbothered by her unconventional attractiveness. He's unsure of what to make of her status as the next heroine, but he supports her on her adventures.

A mysterious, ineffable goddess of indeterminate origin. In the Republic of Man, Ziva is respected, but best left unspoken, since she can either bring great boons or terror to those who speak of her. The gods worshipped by the Republic emphasize domestic life, purity, cleanliness and peace. Ziva is a chaotic, unpredicatble force of nature, with few outright worshippers but many small prayers and acknowledgements.

She usually takes the form of beautiful, exotic women for whoever she appears for: in the Republic, this constitutes beastfolk. She represents every quality opposed to the domestic gods: being impulsive, short-sighted, and often without a plan. In a sense, she's a chaos goddess. She exists apart from the domestic gods but also balances out their natures by seeding the change of status quo throughout the land. Ziva is the patron goddess of the unexpected, the unspoken, and the underestimated. She receives prayers from gamblers, transgressives, iconoclasts, and daredevils. Her boons are wide and varied, and she shows as much favor to humans as she does elves and other races.

A farm girl, hailing from Brookheim, a small backwater town in the Hesse region of the Republic. Despite her notions, she's ultimately still a provincial. There's a joke in the Republic that every Hesse girl gets fed well, and they have more than their fair share of minotaur in the blood. There's more than enough truth- Hesse is the breadbasket, and they're well known for their feats and "bountiful" women. But Alexandra missed out on that "bountiful" part. Tall, skinny, and infamously flat-chested, Alexandra is well-known around town for quite a few things.

The first? She's quarter-elven, but the elf blood came out strong in her. It means she's tall, long-haired, long-legged, and slender. Not fragile, but she frequently comes down sick. She has the dubious distinction of towering over just about every man in her town. It gives her a lot of grief. Especially because she's also flat as a washboard.

The second? Her talent for magic. A great number of humans in the Republic have some amount of elf blood. It makes magical talent a common, and unfortunately unremarkable thing. Alexandra lives and breathes magic. She has quite the raw talent for spellcasting, what she lacks is formal education. It's given her somewhat of an inflated ego. She has a fiery, haughty personality born mostly out of her being the best magician in her town.

The third? Well, she's the first Hero selected in a century. In a time of unprecedented peace, prosperity, and tranquility. It's no small thing. The last batch were there in times of war, disaster and chaos. It's a source of a lot of stress for Alex, who up until then was mostly intent on finding her way into a cushy life, reading books, and studying magic.

I accidentally summoned the hero! Now what?
By Paul_Tromba
After being framed for the use of necromancy, Nero was banished from his hometown and the great magic academy. Having nowhere else to go he set off, only to get lost in the destroyed Imperial city ruins and end up in a labyrinth. After a month of

Virtual World Futuristic Gunners Online – VWFGO
By The_Young_Flash
Zane Crawford was born an orphan and suffered from the unique condition of Psychopathy. Being unable to see the world as anything other than an indifferent hellscape, he did the only thing he could to preserve his sanity – he joined the army

Morphling
By serapheid
Prismordia, an untamed world brimming with life so diverse and exotic, most of it still remains a mystery to its inhabitants of untold years. Magic and wild things run rampant and free in all its corners breathing unto it life. But soon thi
Action Required