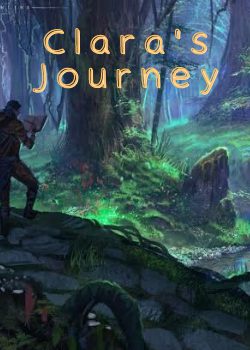 "Isn't it better if I had never been born if my life is just full of suffering?"

Clara was born with a weak constitution. For most of her life, she lived in a beautiful cage called home just with her father. But as if her suffering wasn't enough, her father who left for adventure, never returned.

She is desperate to die, but an unknown entity, Raph, ends up changing her life, forever.

A 3d entity that seems to be forced into a 2d world, that's how Clara describes the mysterious being called Raph.

However for some reason, that almost omnipotent being can't fix Clara's weak constitution and instead, Raph gave an elixir that can prolong her life.

After being tricked, ahem, convinced by Raph, Clara decided to embark on her own journey.

After finishing her training and get used to her cheat, Clara begins the journey to her first destination, the Heroes City of Denia where she would join the Adventure Alliance. However, an incident occurred in this city and she was caught up in it...

Shatter
By yinjenxie
‘There are only two kinds of people in this world. A selfless idiot or a selfish fool.’ – Unknown Zachariel, an ignorant young boy whose childhood has been full of both happiness and pretenses. Conflicted about wha

Rising Star
By CyanidePilgrim
Valerie Endmarch never believed in her mother’s stories. She thought they were just fantasy, something to listen to at bedtime that grew into something more. She never believed they could be real. But dreams of a gate of stars

Black Wind, White Lotus
By SakeVision
In this world, there are haves and have nots. The former are pureblooded humans, some of whom are capable of manipulating qi, the mysterious energy that flows through every living creature, to miraculous results that defy the laws of nature and ph

Summoned as a Ghost in another world
By KrisVFX
Before this happened, Hiroki was a normal student in Japan who enjoyed gaming and reading manga. One day while he was playing on his computer, he fell asleep. When he woke up he found himself in a weird old room. Spider webs ever
Action Required