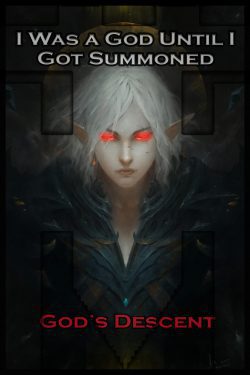 The God of Magic, Rhaxtyx was just chilling in his domain, performing numerous experiments on mortals, just to quench his curiosity. But one time, a mysterious crimson magical circle appeared out of nowhere. Lost to his curiosity once more, Rhaxtyx goes to it and starts to investigate until it shines and takes him to another world.

We opened a Patreon account so if you want to support us here is the link :
http://www.patreon.com/etherioux

Status: chapter 008 – ghosts of the past
Jul 9, 2019
This is an example of a premise with a lot of potential handled very poorly. The writing conventions are actually pretty good, but the writer lacks a bit on the finer points. The "emotional" moments are handled with all the sublety of the Darth Vader "NOOOOO" scream, or the LOTR scene where Gimly finds out the dwarf king died, drops to his knees, cries really loudly, and bashes his head against the stone coffin. The writer just does not know how to write an emotional scene, and does not know how to give the reader a reason to care.
Such issues are almost forgivable though, but the thing that actually somehow managed to make me irrationally angry as I read this was how droolingly stupid the heroin was. She is irrationally violent, and she just refuses to ever use her brain at all. She says if a summoning takes more than 2 days, you've likely summoned an arch spirit. However, when her summoning takes more than a week, she just immediately dissmisses it when she's told she summoned a god. Later, she drops information that a person's mana is fixed from the moment they are born. Then, when the MC proves that wrong and increases his mana, she treats it like no big deal just because his mana is still low.
And, again, the fact that she's irrationally violent and starts beating the MC for absolutely no reason. And then she forces him to be her servant. And then the author wants to somehow tell us these two share some sort of close bond when they have not given us a single scene to show they are actually building a relationship. (Well, he does, but it's really more of a montage. A montage doesn't count. The reader is not actually given any "moments" in full detail.) Then, when the heronine finally decides to tell the MC about her past, she starts it with "one upon a time." I literally dropped the series the second I read that line.
EDIT: I seem to have been blocked by the author since writing this review. Just found out about it now when I tried to reply to someone. This tells me the author has no intention of improving the quality of their work. This was 2 star when I first wrote it, demoting it to 1 star for this attitude from the author.