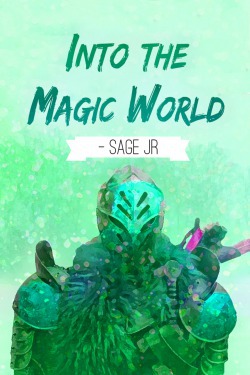 The 17-year-old Alex Ryder is born into a military family with his future already planned by his father. Everything is going according to the plan. Alex was thrown into a military school, and during summer, he had to attend survival camps. Any refusal will be met with strict military discipline. Soon, he would join the Special forces and slowly climb up the military rank.

Yet in his meticulously planned life, fate entered.

During a hunting trip with his uncle, Alex inexplicably entered a dark forest, far away from his controlling father. For the first time, he was free and was excited. But seeing the terrible beasts roaming the forest, he was soon terrified. Alex struggled to survive in the Dark forest until he discovers Mana.

After discovering Mana, everything changed. Alex embarked on a legendary path of Battle God, leaving behind countless myths.

Follow Alex as he explores the mysteries of the Magic world and tries to find his way back.

My Runic Ability is Copy Paste
By Mr.HonestReview
The World suddenly faced an Apocalypse, I struggled for 3 months, until my head was suddenly hit by an arrow. After I woke up, 10 years have passed. I found out that the world had changed. The world is now in a new era where

Magical Girl Revolution
By BioedwinMX
It’s been 15 years since the [First generation of magical girls] manifested in the world. 14-year-old Amy Rochelle while going home from shopping for the newest magical girl figure gets in a close encounter with a [Devil], while trying to p

Naruto: The Weapon Shop Owner
By ForgottenLife
A young man with military background dies and find himself in the world of Naruto as a civilian. With no hope to progress a shinobi, the boy inherits his late father’s weapon shop. This leads to a turn of series where he always finds h

Young Master Has a Daughter
By heplar
Tremendous wealth? Check. Formidable background? Check. Exceptional talent? Check. An arrogance that can anger both gods and devils alike? Check. Daughter? Err, c-check. This young master has it all! ̷
Action Required