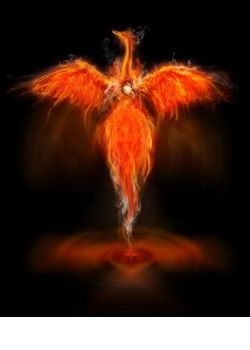 [AUTHOR'S NOTE 07/18/19: The Beta version of KOJI & THE IMMORTAL PHOENIX will remain online until Sunday, July 21, 2019. The finalized version will be available on Amazon and Kindle Unlimited on July 23rd.

To save his kingdom, he must confront the Immortal Phoenix and obtain the Eternal Flame!

Calamity has struck the Northern Kingdom of Nephosia! The demons have opened a portal in their capital city! To destroy it, Koji Adalwin Becker, the Prince Consort and future successor as King, must convince the Immortal Phoenix to give him its Eternal Flame!

However, this assignment isn't simple because the ancient, divine beast has her own agenda. To acquire this special fire, Koji must pass the Trials of the Immortal Phoenix. Furthermore, can his mortal body accept the Eternal Flame without burning into ashes?

Koji must find a way to temper his body to receive this fire. But he must hurry and complete this mission before trapped citizens within Nephosia, including the King and Queen, succumb to darkness forever!

KOJI & THE IMMORTAL PHOENIX is Book Two in The Bonder Legacy Series, and contains GameLit/LitRPG, harem, cultivation, wuxia, xanxia, and Eastern fantasy elements. Because there are numerous explicit scenes, this book is suitable for mature readers only.

Genre
ActionAdultAdventureFantasyHaremIsekaiLitRPGMartial ArtsMature
Tags
Forced into a Relationship Forced Marriage Game Elements Imperial Harem Phoenixes Summoned Hero
Show
Table of Contents
Write a Review
Reset Filters
X
Write a Review
You must be logged in to rate and post a review. Register an account to get started.

Circumventing Fate
By Sekai_Saesang
Lei Xing, a recent law school graduate took the vacation of her life, splurging her hard-earned money on a luxurious cruise to celebrate and relax before jump-starting her career. Unfortunately for her, due to a seemingly random stroke of bad luck

Reincarnation of Third-rate Swordsman
By LuckGod
Discord: LuckGod#6610 Server: https://discord.gg/nSAyNPh A Third-rate swordsman who’s living a normal life with his wife when the heaven’s suddenly turned his world upside down. He’s wife got kidnapped by his

Out of boundaries
By Yoeai
The story follows the adventures and happening events of Satoru in a different world. Satoru always desired to lead a live in another world or have a super power. When it actually happend he was very excited but he also had to do a certain task, t
Action Required