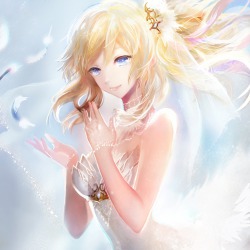 Ren is a reincarnated person. His new world had the same name as his old one, Earth. But that was the extent of the resemblances.

Ren had a skill as well, or at least he was told he did, but he had no inkling of how to use it. He was disheartened at first but his goal wasn't the path to power, all he wanted from this world was to continue the peaceful life, but the world didn't even provide him with that.

A luminous pillar descended upon him and one of his classmates. Goddess Helastia, one of the most revered goddess, called them to herself, not a good news. However, there, he finds that a group of heroes has been summoned from his past world to confront the Devils that will be rising soon.

But contrary to his assumption of being a hero himself, she referred to him as a reincarnated imposter. She labeled both of them as Traitors of Humanity and sent them into a dungeon where they were supposed to live. That is, with their masters and comrades, the Devils and their minions.

The story is good and it is too early to tell what MC will do so far.

The first chapter lacks an explanation of why the character is angry like did the god cast fire and brimstone on his/her world while leaving the person alive.

As I went further within the story, the majority of the focus was on the mechanics of the world, not character development.

All in all, the story has potential and he author can update the story and  cover the questions that readers hold  that are common in each chapter.

I may be here with 10,000 other people from earth, but why am I the only one of my class?
By Winslow
“I am god.” everyone heard that from their TV, Phone, bus, Everyone in the world heard that and started panicking. “And the 10,000 of you with some sort of mark on your arm will be transported to another world with everyone else

Hateful Souls R-18 [A Brutal LitRPG Action Fantasy in Hostile Territory]
By TheAscendentQuill
Jack and Alicia never got along. But they’ve got bigger problems now. Teleported off the Earth, they’re stuck together in Licirmon, a magical world at war. They’ve been tasked with a deadly covert mission behind enemy lin

Ogre Tyrant
By Blind_Watcher
Tim wakes up to find he is naked and alone in a fantasy world. However, he is not as alone as he first thought. There are other people running around all over the place fighting monsters for a living. Unfortunately for Tim, he seems to be one of t

Being A Mage Is Boring, So I Created A Class For Myself
By BluePheasant
Tsuriyama Ryoki had an eye-opening experience and realized how fucked up the current social structure is, and created a thick wall around himself. He always wished to enter a new world, free of all shackles. Finally, his wish came true when
Action Required