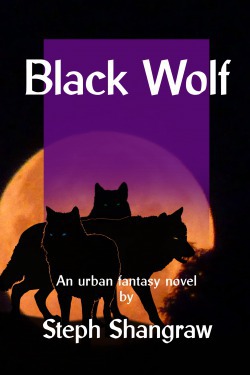 So what happens if you feel like you belong nowhere... then find out you do belong somewhere... and that place should be impossible? There’s no such thing as magic or werewolves, especially only a few hundred miles north of Toronto, right? And what could be in Jesse’s missing past that would make him fit in there?

Jesse’s been having a tough time at home with his adopted parents, and even life on the streets, with the one friend he trusts, has more appeal. During a particularly bad moment, he finds himself some way north of the city he lives in, and things just keep getting stranger from there: Haven, the village he stumbles over, is not only primarily pagan, but a substantial percentage of the population can do insane things. Like manipulating light into doorways linking places, or fixing injuries with a touch, or changing into wolves.

The early part of his life has been a blank to him as long as he can remember, but the more time he spends in Haven, the more hints there are that a place like this is where he belongs. But how did he come to be alone several years before, with no memory? Is there unfinished business lurking in his past that can come back to haunt him in his new life? And how much danger are his Haven friends in because of him?

Very much an Ugly Duckling tale. Only with fewer ducks. ;)

This was my first finished novel. Comfort playing with gender and experimenting with other diversity came later. There *are* intimate poly relationships and a sort of non-exclusive MM friendship-with-benefits. V0.01 of Black Wolf was written during the mid-1990's, while I was in my late teens/early 20s. While it has undergone three or four major overhauls since then, updating it to take place later proved not to be a viable option. I realize some readers may find concepts like the absence of cell phones and Internet rather alien.

Shattered Moonstone
By Tibbit
This is my first attempt at writing, please be gentle with it. I have very little idea where the story will go or how the characters will develop but goddamn it I will try my best to make it somewhat entertaining. Given the free writing style I us
Action Required