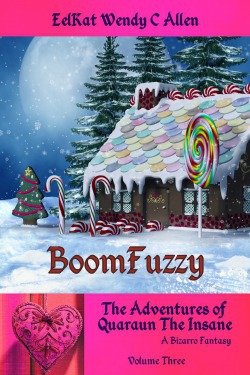 Seven centuries before he became The Pink Necromancer, Quaraun was just a common ordinary Moon Elf, who made the mistake of falling in love with the world's most feared tyrant war criminal: King Gwallmaiic, The Elf Eater of Pepper Valley, King of the Faeries. Mesmerized by the evil Phooka's charm, Quaraun moves into the manically depressed King's gingerbread house, becoming his lover and apprentice, as the shape-shifting Phookan King mascarades around the Moon Elf Villages as the seemingly harmless pastry chef and candymaker: BoomFuzzy the Unicorn. But all hell breaks loose when the ancient king is driven to suicide, and Quaraun in turn murders his wife and children in an attempt to resurrect the Elf Eater as a Lich.

If you ever wondered which of my books it was that was the bestseller which sold 57 million copies... this is it. BoomFuzzy was also the first Gay Romance novel to ever be allowed on Amazon, with Amazon creating the Gay Romance category specifically for this book to be placed on their website.

In 2016 and 2017, BoomFuzzy was awarded "The Best Gay Romance of the Year Award" and was the top selling Gay Romance novel both those years.

In celebration of it's 50th anniversary, BoomFuzzy is being released here, for the first time available free to read online.