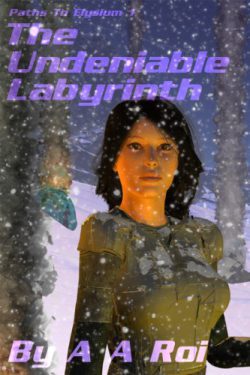 The Legion Consortia Galacium was the greatest civilization that ever existed. It stretched across the galaxy, made up of more than ten thousand distinct human cultures with over two hundred thousand inhabited worlds.

Millenia in age it was connected through a system of extra-spacial conduits called The Mirror Maze. It was said that one could walk from one side of the galaxy to the other in less than a hundred steps. It was a marvel of technology, art and peace. Until The Macros came, and in a blink of an eye it was destroyed.

The Macros are beings of pure motivated Trinary code. They broke out of The Mirror Maze nearly instantaneously across the Consortia, inhabiting and taking control of the technologies from the most advanced worlds to the least. With no defenses capable of stopping them, they spread throughout the galaxy, destroying interstellar culture after culture.

Far from the center of galactic civilization, The Palmyr Century was isolated enough to get advanced word of The Macro invasion. The Palmyr was able to close it’s Mirror Maze gateways to the rest of the Consortia and walled off i’s populated worlds from the threat of The Macros. For more than two hundred and fifty years this protection stood, until it was breached by Althea Ram.

Althea Ram, born on the planet Emerald in Palmyr Century was Trinary coding prodigy. This skill lead her to be recruited by a group, the ZAT, an organization engaged in illegal research into Macro code. When found out, the ZAT was eliminated on orders of The First Centurion. Althea escaped with her newly created AI, Dorian.

A fugitive, she found herself betrayed time and time again. Ultimately she joined a group organized by the Rian telepath Shirae Valerian. Shirae made a deal with Althea for her own reasons and provided her with a Mirror Port which would allow her to reach the Lost Worlds outside The Palmyr. While she is driven to discover the secrets of The Macros, Althea is still drawn back to The Palmyr by the unfinished business that has defined her.

The Promethead is her story. And inside the Undeniable Labyrinth is where the journey begins...