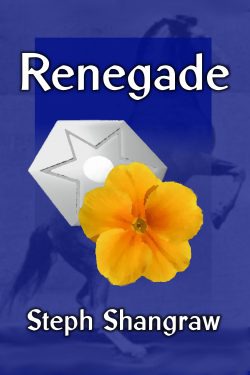 When I was 13, Alina and Jai, who became Matt's parents, met as the result of a rather ridiculously dramatic situation that I thought would be interesting to write. They took off running to a degree that was unlike anything I'd experienced before, racing around Caalden through a series of adventures that, while completely lacking in logic or coherence, nonetheless left me obsessively writing to see what was going to happen next. Ultimately, it came down to the pair of them, Alina's brothers Chris and Rob, Jai's sister Lorienne, and a handful of other friends tackling a renegade telepath, one with a magic gift-enhancing crystal, who wanted a war between humans and the nocturnal, carnivorous alasir for reasons that were never clear. Alina and her brothers being human, Lorienne alasir, and Jai half human and half alasir, the situation simply reeked of drama and angst.

I got curious, eventually, about what their children would be like. Ultimately, that was the birth of the mixed-blood Jordan house, which became in many ways my creative home for several years.

The original material is, frankly, atrocious. I was in my mid teens and my writing skills were crude at best. The characters, however, or at least some of them in each group, have never been willing to simply fade into obscurity; they linger, still vivid, waiting.

I'm unsure whether I can ever find a way to fix the gaping holes in the fabric of Alina's own story, but that of her son is another matter. When I picked it up again as an experiment, Matt and his companions came back to life on the page for me, so eagerly and energetically that roughly 85% of the first draft was completed in 4 weeks, a straight-through run without coming up for air.

I had intended to leave this there, with no further revision—something, maybe, for someone who liked my 'serious' work to stumble across. I'm finding, however, that I'm not willing to do that. I like Kisea and her companions, I like the story she needed to tell, I like what she has to say about fear and choices, I even like the backdrop of Caaldani culture as it currently manifests. I'm not willing to let this hide in the shadows, overlooked because of its roots.

However, because this came from that early a date, there are some things about it that I wouldn't do now, and I can only ask that readers be a little more forgiving. A significant one involves naming. I would not, now, write a story with major characters named Kisea and Kian and secondary ones named Kallima and Kara—the names are far too similar. No, I can't simply rename them; call it a personal eccentricity, but for me, the name is the character. I have no idea why the name of the world (Caalden) has a double 'a', nor why the human capital city (Calton) is so much like it. Similar issues not involving character names I have, however, been able to work around. I apologize, and hope I've managed to make everything clear enough and interesting enough to be worth overlooking a few small flaws. I'm looking forward to sharing Kisea, Matt, and their family with others for the first time in over two decades, and to continuing the experiment with more about the Jordan family.

I hope you enjoy this flashback to my earliest writing as much as I have. Let me know if you want to see more of the Jordans and Caalden!

For anyone who might be curious about how extensive the changes have been, the original core premise, from multiple hand-scrawled versions, was this:

1) Matt, because of his mother's exposure to magical energies at the end of her own big adventure, is born with a very strong but poorly controlled gift of sorcery and also, though it should be impossible to have both gifts, is a telepath;

2) While at the College for sorcerers (in a slightly later version, telepaths as well), Matt meets Kisea on her first day, while her roommate Fala is showing her around, and forms a close connection to her;

3) Kisea discovers that she has a gift variant that is badly misunderstood and effectively illegal (one track I explored was that she was a lifewitch), and/or Matt does something intended to protect her that she can't help but see as a betrayal, and she runs away without taking the obligatory Oath;

4) Kisea meets up, separately, with Matt's cousins Kian and Shon and develops a relationship with each;

5) Kallima, another cousin, is kidnapped, and Matt and Kian and Shon and their friend Jori need to go after her;

6) Kisea is with Kian at the time, and goes along for Kallima's sake to help, even though Matt technically is sworn to take her back to the College as a renegade.

That, generally, is as far as I got. There was abundant angst, drama, and head-scratching illogic; I had little experience with life, little skill at handling complex situations or relationships, and little concept of consistency and flow. However, the current version actually succeeds at salvaging far more of the original threads than I expected—while weaving them into a much stronger fabric with a strikingly familiar pattern.

The Hatchling
By Vyria_Durav
Sarric dreamed of dragons all his life; such flights of fancy captured his imagination at a young age and sustained him through a life of struggle at the hands of the cruel hunters that ruled the isolated mountain town of Rivermist. One day, a tru
Action Required