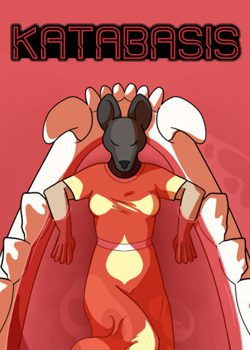 A failed ritual leaves an immortal woman bound to a monster. Now she must contend with their budding (and violent) partnership, a killer bent on hunting down her kind, and the search for the legendary creature that could make her life normal again.

In an alternate Earth where humans have the heads of animals, and where the animals aren’t always what they seem, the Firebird rules myth and legend. Said to have divine power, it appears every millennium to grant the wishes of a select few. A young woman discovers that she's among them, but there are two problems: She doesn’t remember ever seeing the Firebird, and she definitely doesn’t remember wishing for immortality!

Ignoring her thrill-seeking nature, she's decided that her only way forward is to get a degree. But after being attacked, she finds herself in a magical bond with a violent monster- one who's taken a keen interest in her ability. Now her only chance of getting her normal life back is to work with him and a group of newfound allies. She must dive into the space between life and death to uncover the Firebird's secrets, along with a few things about herself, too.

But her attacker is still on the loose, and the task is more dangerous than anyone realizes...

The Twins of the Aletere
By JMMatheis
[Book 1] – Shadow of the Eclipse [Complete 2nd Draft] Finding the path and mending the wounds of grief is a tumultuous undertaking for the twins Desilantre after the loss of their parents a year earlier. In the midst of battle, a fat

Path of the Ascendant
By Oculus
A million years ago, the Western Continent was forever changed by the establishment of Yi City, the largest nation in recorded history. Split into many districts, it was the greatest accomplishment of its creator, but its glory did not last long.

Strawberry Devil in a Fantasy World
By blanksphere
After I died, god asked me, “what do you want to incarnate into?” I thought about for a good while, “god.” Why wouldn’t anyone want to go for the god route? “Mm, I see. You’ll be a strawb
Action Required