Get the quest, kill the monsters, grab the loot, don't die. How hard can adventuring be? When the party is a fashionista wizard who'd rather stare at her reflection than dirty herself with actual combat, a thief that picks locks by ripping them apart, a paladin trying to do the right thing, and an archer that's better at talking to plants than people, then even a simple quest can prove a challenge.

Hired for a variety of tasks, from retrieving the legendary Dragon's Veil to bodyguarding the wealthy or thwarting apocalyptic prophecies, the problems in their way may well prove their undoing; lonesome medusas, sticky-fingered psychopomps, aggressively passive golems and fearsomely violent geography stand in their way, as well as the minor issue of simply not actually trusting, or even liking, each other!

Note That i've read ahead (2 and a half books) when writing this review. Slight spoilers.

I'm going to have to give this a proper review. So, be warned, it's going to get wordy. That little nugget of wisdom out of the way, let's dive right on in to Goldthirst. I'm going to go out on a limb and say this review won't be entirely unbiased. I will make it clear that I enjoyed this story VERY much, which is a rare thing. In fact, I can't think of another story on RR that hit all the factors needed for me to actually enjoy a story as much as this one. This little gem was randomly found of Latest Updates, and I've been following it for a while. It's never failed to please.

It would be a misnomer to say it steadily increases in quality, although it might aeem that way. To me, it's more of the author fleshing out ideas and characters than getting better at writing. The quality is there from the start, just not as recognizable as it is later on.

Currently three books deep, along with a few side stories I genuinely enjoyed as much as the main plot, Goldthirst has a lot to offer readers. I'll try to keep it clear and concise, although I might ramble on a little.

Termed 'DnD Comedy' by the author, Goldthirst is so much more than that. Oh, it more than provides the comedy part, but with far better execution than many comedy stories I've seen. See, here's the thing. It never forces a situation into comedy, or tries to get a cheap laugh from you. I stead, It always plays it to the characters, and feels natural. Antics with consequences, I like to think of it. Oh, sure, Semari might goof of an try to headbutt/wrestle every mountain goat she comes across on and endlessly looping trail, but how they deal with the consequences of her actions is just as good, if not better than her actual antics.

While the main focus of the story is comedy, it never shoves it in your face, instead leaving you to form your own picture. This method is also used to great success on some characters, more on that later.

Instead of one long serial, this could be seen as two and a half mini-serials, each starring the same cast of characters and with ten-fifteen chapter adventures. Each of which might have mini-adventures, all of which feel well-done and relevant. The sypnosis doesn't lie, and delivered everything I was hoping for when I read it. Also noticeable Is the author's complete disreagrd for filler. The chapters, while shortish, are bursting to the brim with not only content, but memorable moments and quoteable scenes. This is something not often achieved. A story that tried not to take itself seriously, but instead ends up just as thought-provoking and engaging as stories that deliberately try to be that way.

While little is known about the overall world, many of the themes and places introduced feel fleshed out and deep. Not just that, but it offers a stark new look at a world where the epic fantasy adventues we read about are everyday things. It doesn't go Light Novel whimsical and exaggeratedly brush of topics and whatnot, instead hitting just the right mark. A world where the 'eldritch abomination that must be stopped' is a mildly exiting day at work.

There's a layer of redundency and normalcy underneath the fantasy and adventure, where practical decisions like using a rope to drag a cursed sword around behind you is common sense. Where cursed ferrymen of the eternal darkness use pomp, gravelly voices and grand speeches of doom to add some excitement to their jobs, all while hiding their lunch sandwich behind them and wondering when adventurers began asking for receipts when paying the dark toll.

THIS is the sort of story-telling and complexity that made me so enjoy Goldthirst. The peeling-back of a layer and looking underneath the swords and sorcery. This, hidden underneath a skein of well-written comedy makes this fantasy gold.

Yet, even further underneath that are deeper themes. Like when a person is forced to sacrifice one member for the good of the team, familial manipulation and cruelty. Deep, dark things. These aren't waved around and advertised, but buried and left for the reader to find, if they look hard enough.

I'm no great expert on this subject, but the style doesn't just suffice, it shines. Your have that rare knack for not only engaging the audience with clever wordplay and consistent plot advancement, but being damn sneaky about it. The increasingly stronger lure of your writing should not be underestimated.

When looking at the sypnosis, I thoight to myself: "I'll try just a chapter." All too soon, that chapter was gone and I tried another. Pretty soon, I had put off my own writing and had binged an entire book.

The pacing, while fast, isn't too fast. It just seems that way, with the author's total disdain for filler.

One thing I did notice, though. This might be a personal choice for you, and there's really nothing wrong with it, just niggling me all the time to point it out. Using (') Instead of (") marks to ondicate dialogue. I don't know the exact grammar rule when it comes to those two, but bear in mind most people are used to reading with the (") mark.

Par excellent. While there might be a spot or two where you forget to put a space between words, those are long-forgotten and unimportant in regards to my personal enjoyment. Prose is great, worldplay even better, dialogue top-notch (Please teach me how exactly you do that) and no mistakes, at least from my rather low knowlwdge of grammar rules.

I really wish I had some genuine critique/criticism at this point. But I don't, so that would be needless nitpicking. The chara ters here, right from the get-go, feel like a fully fleshed out cast with their unique dynamics and approaches to life. And when I say fully, I mean FULLY fleshed. Each character is completely unique, colorful in some way, and oh so engaging.

This feels like the third act of a story, were we've already skipped past the introductions and so on. It's obvious the characters know each other and some of their secrets. All in all, a refreshing change of pace from the usual fantasy stories. Each character has their own unique speech patterns, drastically different views on life and approach to it. Most of all, they feel real. The amount of work it takes to achieve all that is no small thing, and should absolutely be recognized.

One of the thing I liked the most was the author not telling the reader how to feel about a character, but letting them devolop their own thoughts on it. This came as a stark surprise to me, when I looked up from a side story and realized that for the first damn time, a character (a necromancer, no less.) had actually come across as CHARMING. Not because the author told me he was, or the character talking to him told us that, but because he genuinely felt that way THAT is no mean feat, when an author can reach through the pages like that.

That cast as a whole is delightfully wacky and non-standard (no edgeyness, thank Mejiro for that). Colorful and eccentric, Semira, Janaxia and Parth are in sharp contrast to the slightly more normal Stathis. Here, wacky doesn't mean stupid or outright childish, but rather well-written eccentricity. Congrats on that.

All in all, I rate this cast VERY highly, with even side characters following the trend of being unique and deep.

- Parth was staring up at the sky, either having a moment of divine communion with the heavens, or just really, really drunk, needing Stathis to tug her along.

I've already said all I have to say. As a story to enjoy, and maybe take seriously, Goldthirst smashes past every standard set for the genre, standing triumphantly atop a mountain of mangled competition to be the one true G.O.A.T

.. Seriosuly, though, I just wish I'd found this a month from now. Just so I don't have to agonozingly wait for more chapters. 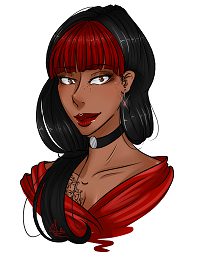 The Eighth Warden
By IvyVeritas
Cast out from his knightly order for using magic, Corec had no idea what the future held in store when he left his homeland. When beautiful women start ending up linked to him through mysterious runes – and not necessarily happy about the fa

Sis Loves Me Way Too Much (18+)
By MyLadyQueen
Cindy Ferguson, an I.T specialist has finally gotten over her ex who broke her heart. Going through her best friends feed on Instagram she sees a comment that intrigues her. After further investigating the person she contacts him. After the

[BL] The Actor Didn’t Want To Live Anymore
By Lost_Strings
Long Jun was an actor. No. He never showed up on films nor acted on a theater. He was an actor in his own life. He’ll smile whenever he was sad. Hell laugh when he’s bored. He’ll always says th