Those fools under-powered my summoning ceremony and I was 'left with the bag'. With inadequate soul potential, I've had to curse myself to create an opportunity to live, perhaps live well in this new world. Or...maybe I just totally screwed myself. Even the goddess got curious when she realized what I had done.

“So, she finished. I wonder what took her so long to decide...WTF! Interesting! Let’s mark her for further observation to see how things turn out. This girl is perhaps the most entertaining thing to happen in the last few millennia. Hmm, let’s mess with her just a little bit. Tweak this here...and...a little over there. Heheheh. This will be FUN!"~Goddess

She tweaked my status settings after I had spent so long on them just to make things a little more entertaining. Well, at least she only changed some cosmetic and semantics stuff. None of the vital parts of my status were ruined. 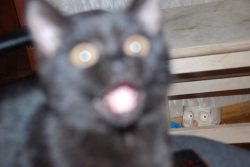 Great premise, and great skill/status/system building. I just love the idea of vampires and the skill assimilation.

Sofy's turning abusive, and while that could be for the plot, its not good thay lily is always just submitting, Lily just doesn't have any character develolment or character traits aside from being teasing, submissive, and s*xual.

I was warned from the tags that there's those things but come on, give us some action and adventure. As much as its kinky, every single chapter is just them making love through more and more different ways, the skill system is totally being underused even though it has great potential.

The writing itself is passable and while there's the occasional grammatical/spelling error, its not bad. Its all tell and no show however. The fight scenes are bland and too concise.

But if you're someone who expects action, adventure, skill assimilation, and others, better steer clear or atleast, be warned. Im still not sure about further chapters but at this point im losing the drive to read further.

It's good for the first 20 chapters or so, but after they strike out on their own it just becomes smut with some story mixed in, and the smut is heavy BDSM which I'm not into and a good amount of it seemed like straight up abuse, the characters actions aren't fully consistent either and the main love interest despite having her father's side of the family really started to act like them treating the MC like a slave meting out punishments that on at least one occasion had permanent effect and all the MC did to deserve them was teasing, teasing literally the ONLY person she can speak to, and the goddess completely changing the terms of the servitude curse the way she does COMPLETELY removing the safety nets the MC puts in place annoyed me but the lack of reaction from the MC? Ridiculous I almost never drop a story the amount of times I have can be counted on one hand, often if I don't finish a story it's because the author dropped it not me, and I have read hundreds of them, having said that I am dropping this story.

Beside that the story is reasonably fun and the writing gets decent really quick.

It's a fun story with a fresh take on the isekai and character creation tropes. However, it is unfortunately riddled with grammatical errors and pacing issues. What bothers me most, however, is that the system in use isn't ever really explained or put into perspective. There's all sorts of numbers, which I love, but I have no idea what any of them really do.

Still, it's fun, and I would recommend it, even though I'd have to give the above mentioned caveats.

Grammar and pacing have both significantly improved. Character growth is slow, and the thoughts/feelings of the MC are sparse, but the author has stated that those willing be coming relatively shortly.

I'd put this at like, 3.75 stars if I could, at least until I see some real character growth. It's still early days, though, and I'm definitely still enjoying myself.

The story without kinky parts is not worth reading, it's ~3 stars. It's okay up to chapter ~30, later it's there just to support the kinky parts.

Almost all guys in the story are assholes/rapists. Well, we can't have them leading the girls from the yuri path :)

Unbound
By Necariin
Felix was transported from Earth to another, altogether strange land that relies upon an omniscient system that operates much like a video game. Skills can be learned, stats increased, even your name and species can change. Also monsters. Don̵
Action Required