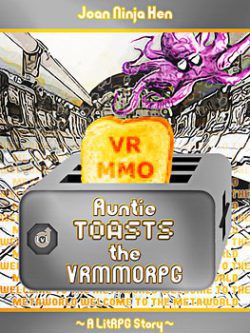 ~~ On Hiatus until August ~~
A retired German engineer enters the VRMMORPG because her son thinks she can't burn it down.

Contains no / nearly any:
- Romance
- Plot

(First, I clicked the Mecha-Genre but removed the genre later. It will take a long time until there are real Mechas. Meanwhile, the MC wears mech-suits.)

For additional information, companion vids and pictures, please check out my Patreon posts with the tag #attv.
Companion videos on YouTube are in the playlist Auntie toasts the VRMMORPG.
☯ Patreon: https://www.patreon.com/Joanninjahen
☯ Ko-Fi: https://ko-fi.com/joanninjahen
☯ Discord: https://discord.gg/hX8gWPE

A nice little read, comedy heavy with insane grandma as the MC.

The grammar isn't perfect, thus my reduced score of 4-stars, but it's far better than the majority of absolute trash you can find even on this site (Seriously, who doesn't capitalize letters at all when writing, make conversations sound like bullet-point presentations of a summary of a conversation, and can't even get through a paragraph without trying to defy the linear nature of time by mixing up the past, present, and future tenses all within a single sentence? A lot of people... more than I would like to admit. The education system has failed hard).

The story is a fresh take on the VR Game scene, allowing the game to feel like a game (fun with some aspects of grind and reward) though it still seems to heavily reward the MC for being the MC (admittedly her backstory allows for these bonuses to seem slightly warranted).

The characters and world-building are nice, though admittedly it is currently lacking in growth, I attribute that to the lack of chapters thus far (only 27 chapters, or parts) and expect a more in-depth look into the characters and world as the story progresses.  I like the crazy old lady, she has a charm to her that allows you to understand why her son would have such a happy/grumpy relationship with her.

Overall, I'm loving the comedy and progression. Might need to dial back on rewarding Granny for every move she makes (not literally every move, but far too many of them at this point) because it makes her feel like she's a bit too perfect or is getting unseen help from someone in charge.

This is, at last thus far, a very light hearted comedy, and is well worth the read. Perhaps eventually the story will show something a bit more serious, but even then, someone or something will probably make the situation humorous. 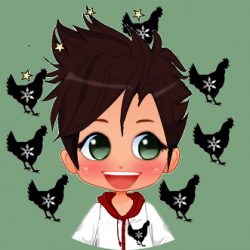 He Who Fights With Monsters
By Shirtaloon
Access the discord here: https://discord.gg/CDV5SqM Story is currently on Hiatus until February. Book 9 starts with chapter 595. Earlier books available on Amazon: https://www.amazon.com/gp/product/B08WF8SB71 Jason wakes

Data Dragon Danika
By gusdefrog
After a great deal of preparation, Danika begins her new digital dragon’s life in a very small way. They say the “Living Jade Empire” creates individualized quests. They say it can read your mind. They say you can find you

An Unbound Soul
By cathfach
When Peter suffers a too-close encounter with a truck, he finds himself reborn in another world. At first glance it is a perfect fantasy land. There’s magic to play with, elves singing in the forest and a hyperactive catgirl neighbour. There
Action Required