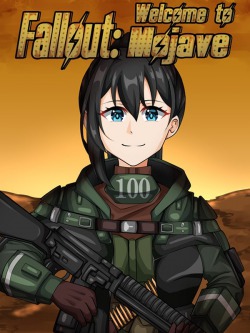 Enzo was an ordinary college graduate. After three days of working non-stop, he finally gave in to the exhaustion and eventually died. He thought he was dead, but he heard this thing instead of God.

"You're awake, How about that."

Instead of God, he saw an almost balding white man sitting beside his bed. He realized he had been reincarnated into the world of Fallout: New Vegas. Follow Enzo he went on an adventure before the courier entered the story.

Going to Primm? Of course.

Trying to mess with NCR? Perhaps.

Getting to new vegas? Definitely.

Talking to a giant face on a monitor? Why not?

Rebuilding the United States of America with Enclave? Let's see

Follow Enzo as he goes through the quirk and absurd moments in the world of Fallout.

A/N: This fanfic would also display the world of Fallout 4, but quite far into the story. I also combine the mechanic from New Vegas and Fallout 4 in a way that is desirable, at least for me. Sorry in advance if you don't like some of the mechanics used. I won't use mechanics that people dislike, such as the fusion core in Fallout 4, etc.

Also, some of the things in this novel aren't that lore friendly. One thing that I tried to do is incorporated some of the modern tech and weapons into our world, of course, with its own reasonings.

Who is the person in the cover picture? She's Aurel. Who's Aurel? I'll let you decide who else wears an Elite Riot Gear.

Genre
ActionAdventureFanfictionIsekaiLitRPGMysterySci-fi
Fandom
Fallout
Tags
Based on a Video Game Conspiracies Firearms Kingdom Building Military Post-apocalyptic Special Forces Weak to Strong
Table of Contents 46
Show
Reviews 0
Table of Contents
Write a Review
Reset Filters
Write a Review
You must be logged in to rate and post a review. Register an account to get started.

Is it Wrong that I Woke Up in Danmachi as the Main Character?
By HappyVainGlory
Bell Cranel was rejected by every familia he tried to join until he met Hestia. In a few, he was rejected quite violently. And in one particular instance, he was thrown out and bashed his head against a wall. Well, that’s apparently w

Naruto, the Uzumaki Emperor [COMPLETED]
By Nyatsui
Naruto was alone, not even once he had anyone that cared about him. He was beaten by the villagers for no reason, he wondered where so much rage came from. He wondered, why everyone hated him? He started to hate them. Have you ever w

Lord of Fire is a Gamer
By Lowkeygoodstuff
A Fire Nation Noble gains the memories and the cheat of a NEET from the 21st century after he tries to take over his body but fails. Gamer-lite. Might be smut but later, you know plot before ‘plot’. Edit: No smut but there
Action Required