Fleur Bellrose was not a good person by all accounts.

In fact, one could argue that she stopped being human a long time ago. Born as the daughter of a renowned diplomat she soon strayed from the path of humanity. Using her world's technology she changed herself into something beyond human. Her emotions deadened and her empathy lost, she turned to crime and violence.
Her fate seemed sealed when her last heist went south. She was caught, imprisoned and condemned to death row. Yet by a stroke of luck, be it good or bad, her breakout attempt ended in an escape of the other kind. Summoned as a Demon into another world and another body, she soon finds out that emotions and feelings may have more importance than she had thought before.

Follow Fleur and her companions on a - not so - magical adventure as she finally - after ten years - finds out what it means to be human, in a world that may not be as different from the one she left. A world, where humans - always - can be monsters while demons may - not - be saints . . .

This is a story about emotional and personal growth, not one of mindless murder. 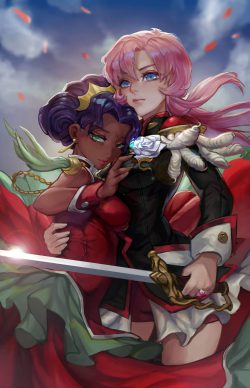 If you're into fluffy cute sugary like yuri/girls love stories... Dont read this.

But if you're, into violent, hardcore, explicit yuri/girls love stories... Then DEFINITELY READ THIS!

Well, I might not have described the story accurately, but bottom line is, THIS NOVEL IS LIT!

So far I really enjoy it, and, for some change, the MC is not a old good shoes on a girls body and is not perfect either.

And sorry for the bad english, its not my main language >///<!

Sis Loves Me Way Too Much (18+)
By MyLadyQueen
Cindy Ferguson, an I.T specialist has finally gotten over her ex who broke her heart. Going through her best friends feed on Instagram she sees a comment that intrigues her. After further investigating the person she contacts him. After the

Maou Shoujo Magical Chaos
By Meakashi
Death and Reincarnation. Kuroe Makoto, the tomboyish ace of her high school track and field club, never spared a thought for these things before. However, when she falls asleep in her Tokyo home after an exhausting marathon and wakes up in

So I Summoned a Succubus…
By glenn-fletcher
Scott Cordova is your average Pennsylvania teenager. He’s got an annoying younger sister, a habitually absent surgeon mother, and an interest in the paranormal. So, well, maybe not so average, but still… follow me here. Scott spends every d
Action Required