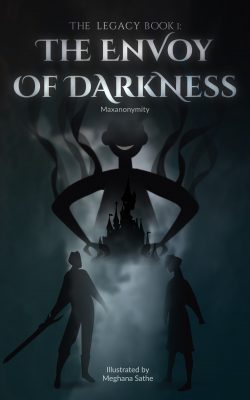 "Everyone loves a good fantasy, but my life was turned upside down by one."
What would you do if you had the ability to control the air? How about if you were suddenly brought to a world where, despite your powers, you’re at the bottom of the food chain? On a fateful night, Max Walker finds himself summoned to Asterisk and contracted to Liliana Lockwood as her familiar.
Forced to leave behind his life on Earth, Max begins a precarious journey into the unknown world of magic. Training as a knight, learning to control mana, battling rogue necromancers and even being mistaken for Duke Walker's son... it's just one thing after the next.
But as if that wasn't bad enough, Asterisk, a world which subverts reality as you know it, may just have something to do with Max's own heaven-defying origin... and a secret that could leave the universe hanging by a thread.

This is Book 1 of a projected Trilogy titled "The Legacy".

Schedule - Chapters will be published once a week, around Sunday. Bonus chapters might come in occasionally now that I have a stockpile.

P.S - Feel free to comment, especially if you have any advice or criticism to offer. On that note, if you could leave a review/rating or state your thoughts about the novel as a whole that would be awesome too.

Finally got the cover designed!

A really good foundation and clearly good abilities, but awkward and simplistic execution.  Feels a lot like a partially filled in outline rather than a fleshed out story.

Let me be clear about my criticisms:  I give them as I think this author has a ton of potential! I'm harsh because I'm disappointed that this story which has all the parts nessicary to be great, doesn't quite make it.

The writing is mostly there. Some weird word choice here and there and a tendency to choose complex words rather than their simpler equivalents.  The author also uses a bit too many adj and adv.

The setting is very vague, there are cars and guns, but there is very little explanation or questioning of the rest of the world so it's unclear to me if the rest is medieval or more modern. It seems like it's just medieval world with guns and cars randomly since there has been no mention of other electric appliances, phones, lights, etc.

The plot seems like it was planned out fully from the start. Unfortunately it is rushed and much of it is forced.  One of the first chapters has the MC make quite a few decisions that seem to have no reason behind them.

Characters are thin, but that's OK.  I am disappointed by the MC and his summoner's relationship though.  She pulled him into this world forcefully and he has been following her with no explanation as to why he doesn't just go off on his own, nothing has been shown about the function of the familiar contract as he doesn't seem to be her slave but just a person with his mark on his hand for all we've seen. She acts as if he owes her and he accepts it despite having no reason to.

An other issue I have is that very early on the mc's background is revealed and we are told that people have certain expectations for his growth. Personally I find this kind of development, just like prophesies, heavily detracts from the joy in seeing the MC get stronger since we already know he is expected to easily grow to  pinnacle, whether he works for it or not.

Hell’s Gate: Reborn Mercenary in Another World
By spiderbink
“His steps caused the earth to quake, he went, bringing the flame and storm with him. All forms of calamity wreaking havoc on all who dared stand against him, the Lord of Disaster” Thrust into a new world after being betrayed by

Celestial Dream – Reincarnated in a cultivation game world
By XKARNATION
Yuan Khan was given another chance at life. Despite being bedridden and without parents, his very wealthy grandfather created an entire game world just for him. He was allowed to create himself a new body, a stunning 20 year old cultivator at the

Magic Emperor
By Snow_Flake
He was born as the youngest child of a poor noble family living in the backcountry. Having no administrative skill, he couldn’t do anything to manage the vast land his family has. Fortunately, he was blessed with a very rare talent, t
Action Required