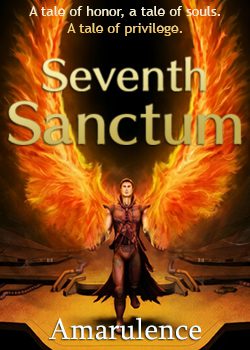 Three hundred years after the Splintering, the founding nations of Kagreth divided into fourteen interconnected landmasses. Their cities were built atop the ruins of old, and despite the loss of centuries worth of culture and the genocide of over a hundred unique sentient species, the world moved on, unfettered by thousands of unmarked graves past.

With the greatest threat to the world, Exar'ad-heuld, constrained by the Divine Eden of Solaith, the continent entered what could be considered its first time of peace. But fate had other plans.

Alongside the rebirth of Haven, a cult of devout Exar-acolytes, a plan has gone underway to tear the nations of Kagreth asunder. Artifical Etherfire—the result of decades of research, concentrated into a single, unifying goal: to free Exar'ad-heuld from his bindings, and conquer the current Age of Peace and morph it into an Age of Chaos.

Follow the journeys of several members of the Adventurer Association as the world slowly begins to crumble around them. Can the threat of an Age of Chaos be overturned? Or perhaps the continent will be thrown into tragedy, to be enveloped by the causation of madness.

Every chapter will take place from another character's point-of-view. Many chapters will be episodic, and can be read without knowledge of the previous or future. However, each chapter is part of a grander world, with each character's personal narrative contributing to the overall story.

Ray: The Ultimate Mage.
By hastalavista
He was resting his face against his knees when a woman approached him, “Why don’t you play along with the others?” She said pointing at the playful faces in the playground. “I’m tired.” The wom

Paragons
By BrianBlose
The universe is a strange place. First the stars in the sky began to change, twinkling out to be replaced by stars identical to the sun. Then an alien fleet appeared in the solar system, decelerating without obeying the laws of physics. None of

Chronicles of Aonus [First Draft]
By Roxyreads
⚠ This is an unfinished first draft of a story that will not see direct continuation, please keep that in mind while reading it and consider checking out the second attempt I’m working on through the link below! ⚠ Amber is 27 and havi
Action Required