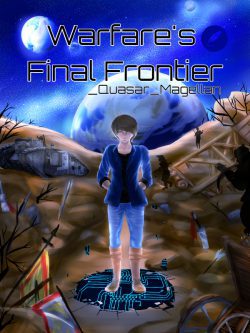 What if military minds from every civilization came together and fought for supremacy using weapons both ancient, modern and futuristic?

The only concept more thought about than what will happen during our lifetime is what will happen in the next lifetime. Turns out, the so-called afterlife is nothing more than being transported to a place where your greatest characteristics will be able to shine. Unfortunately, so is everyone that has ever existed and everyone that ever will. This new life, for most, is not a mercy. Instead, only those who have clawed their way to the top could ever hope to live peacefully.

For Baron Magellan, he reincarnates into the planet of the military strategists where he has to compete with countless generations of strategists, pirates, rebel leaders, etc. Ranging from Napolean to Subutai, to Bai Qi, to Alexander the Great. There are no shortages of battles and ruthlessness. There have been no recorded deaths on this planet and some inhabitants have lived for over 10,000 years. Every millenia, there is a tournament that pits the best of the best against each other. The winner gets whatever they wish.

Most everyone on this planet are divided by countries such as Greece, China, the United States of America, and Egpyt. However, there is one mystery that is on everyone's minds. Who are these people from the community of Jordsand? This community has won the once in a 1,000 years tournament every single time.

For this first week, you can expect a release rate of 2 per day.

or you can come onto this site and enjoy almost 300 chapters if you have a bit of free time during the holidays.
https://www.moonquill.com/book/warfares-final-frontier

Genre
ActionAdventureFantasyHistoricalIsekaiSci-fi
Tags
Futuristic Setting Generals Gunfighters Military Transported into Another World Wars
Show
Table of Contents
Write a Review
Reset Filters
X
Write a Review
You must be logged in to rate and post a review. Register an account to get started.

The Ill-Star Traitor (BL, 18+)
By Lily_is_black
Warning: This story includes rape, confinement and lots of smut. Gong/Seme: loves to tease and has some issues. Shou/Uke: I’m not that evil, so he will have a ‘happy’ ending. Story summary: Luo Min didn&#

Blood Destiny
By Awyn
Blood. Everyone has it. Everyone needs it. The part of us that we can’t survive without. Destiny. The way you walk without realizing it. The path in which people denied to exist. At the end, is it t
Action Required