Life is finally turning around for Rian Karasawa, a fledgling streamer and speedrunner. When Reflect Systems releases their long anticipated VR MMORPG, Project Mirage Online, Rian knows his opportunity is finally here: the explosion of his streaming career. Thanks to recent technological advancements, the line between "virtual reality" and "alternate universe" has finally become blurred, and everyone is flocking to the game to see it for themselves.

But on the way to pick up his headset, an unfortunate encounter leaves Rian injured and comatose for over a year. Upon waking, he discovers that his mom—a once legendary pro gamer—has disappeared. All that’s left behind is a note, telling him to come find her inside the virtual world of Mirage.

Upon logging in, he alone among millions of other players becomes stuck inside the game with a limited number of respawns. To solve the mystery of his circumstances and his mother's disappearance, he’ll have to explore the vast reaches of the continent, ascend the ranks of PVP, master the intricacies of PVE, and survive feuding guilds all to confront the central AI and unravel the true nature of the game. But the further he levels up, the more attention he draws to himself, and the more dangerous his situation becomes.

After all, being trapped inside virtual worlds is bad for business. If someone were to discover Rian’s secret, it could mean the game is shut down for good—with himself included.

Update schedule: 1 new chapter every Monday, Wednesday, and (sometimes) Friday. Patreon access: up to 12 chapters ahead. 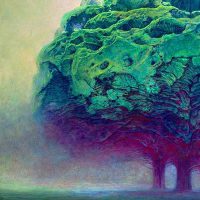 Legend of the Gunslinger Mage
By ImBloo
In 2042, the Virtual Reality game Epoch of Liberty (EoL) is a worldwide phenomenon, with a player base of 500 million and an in-game economy comparable to Russia. Mahn Li, the top player of the guild Scourge, was betrayed by his closest fri
Action Required