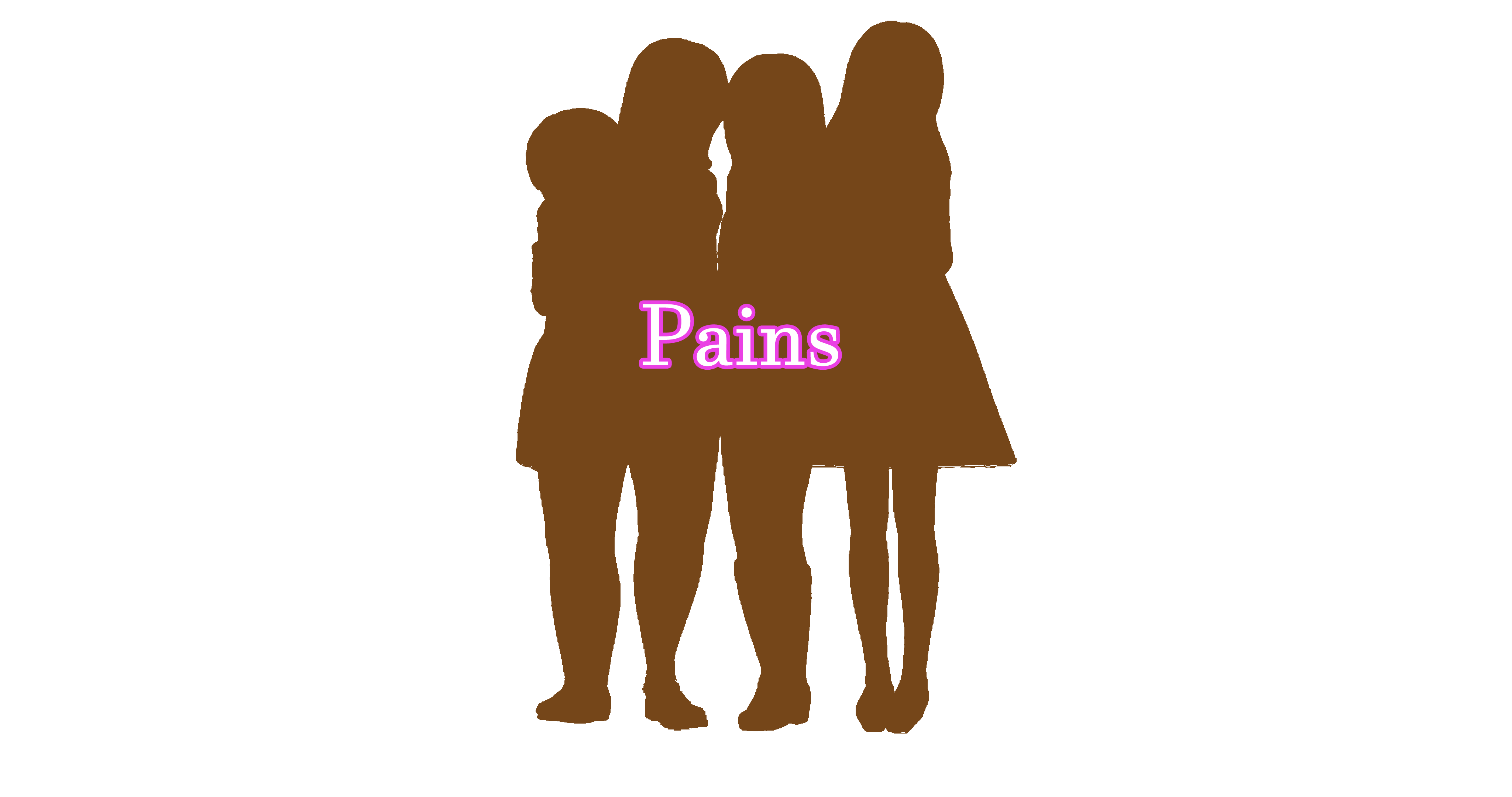 Once we stepped on the train, we all filtered into a corner to not bother most of the patrons. I made sure to stay closer to Okabe-san so she won’t feel excluded again, as Saya-san suggested. 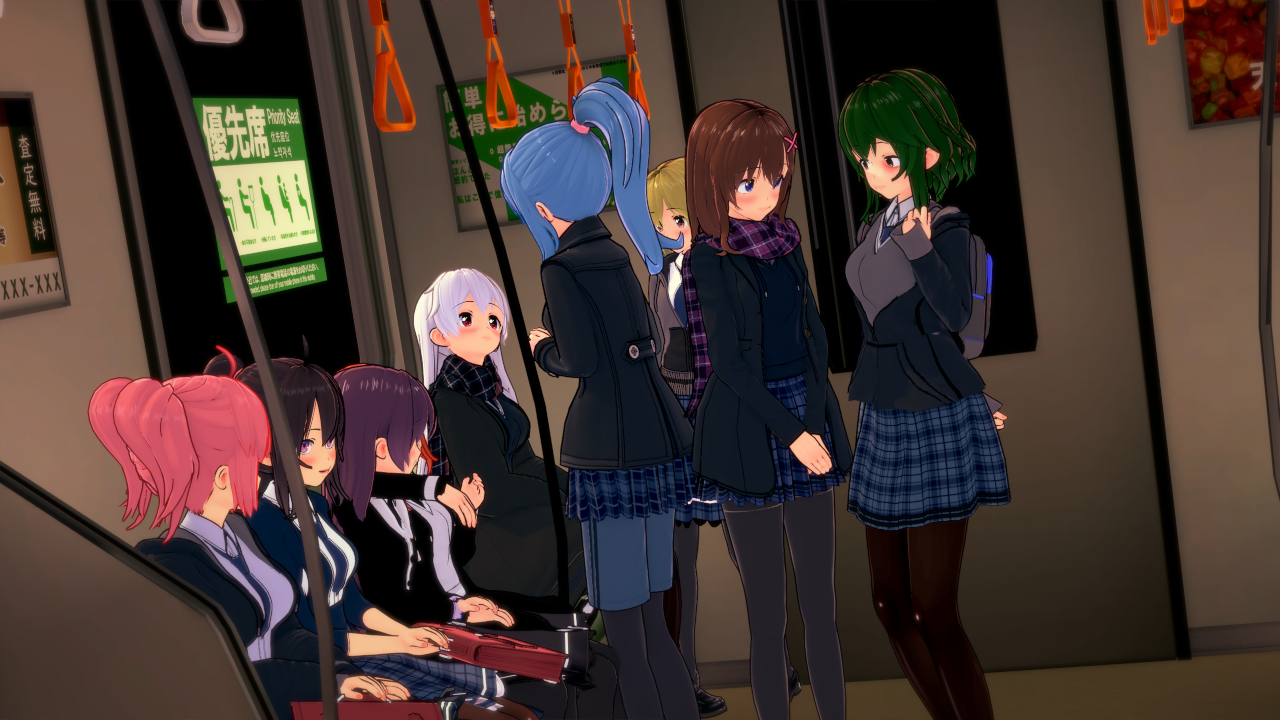 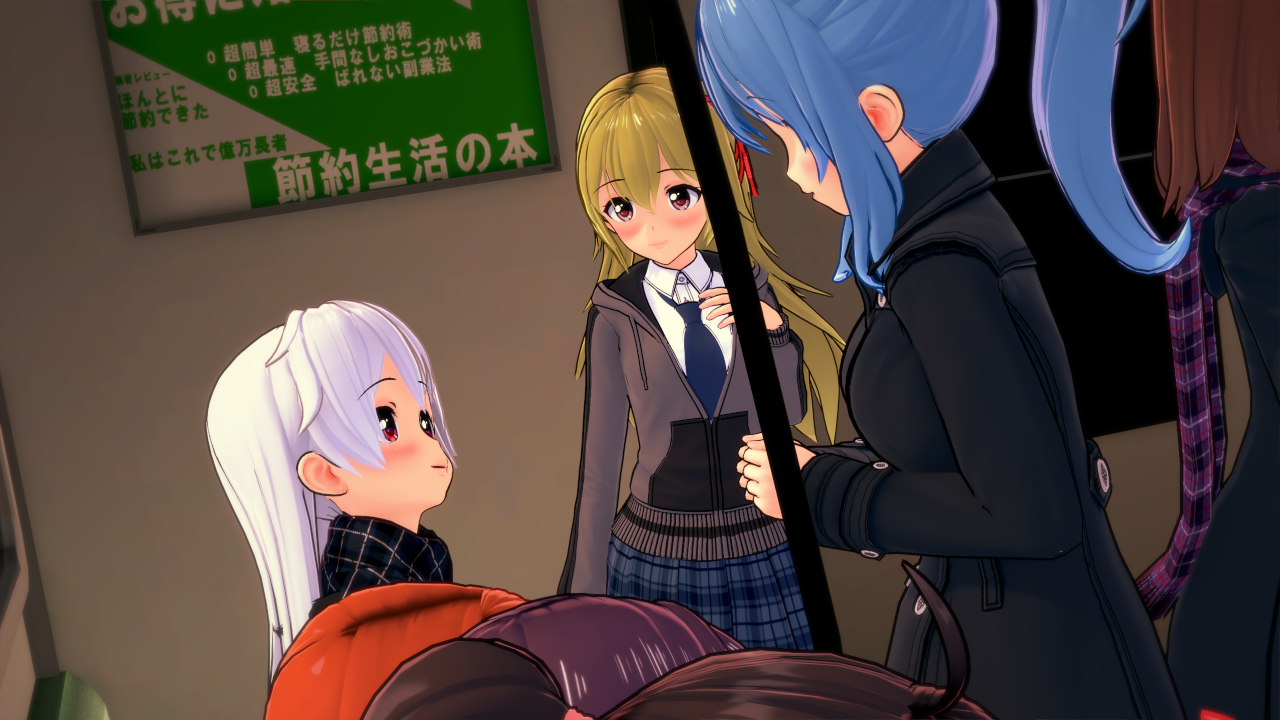 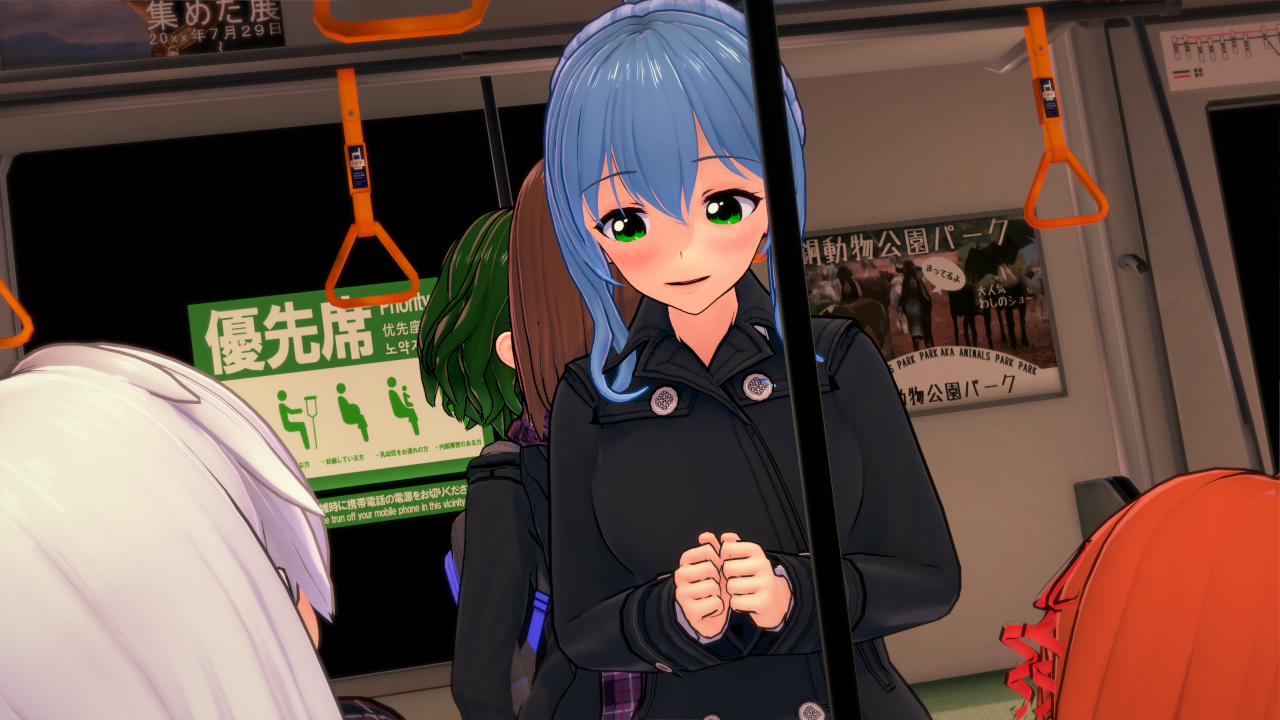 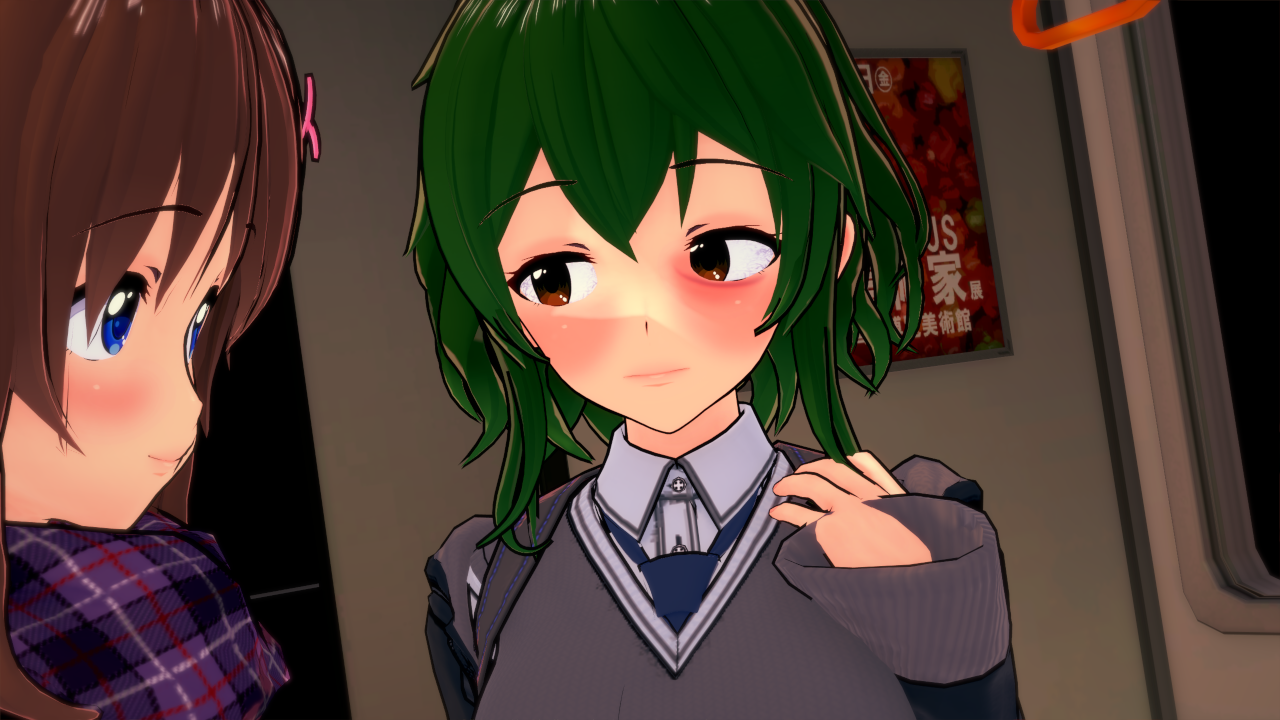 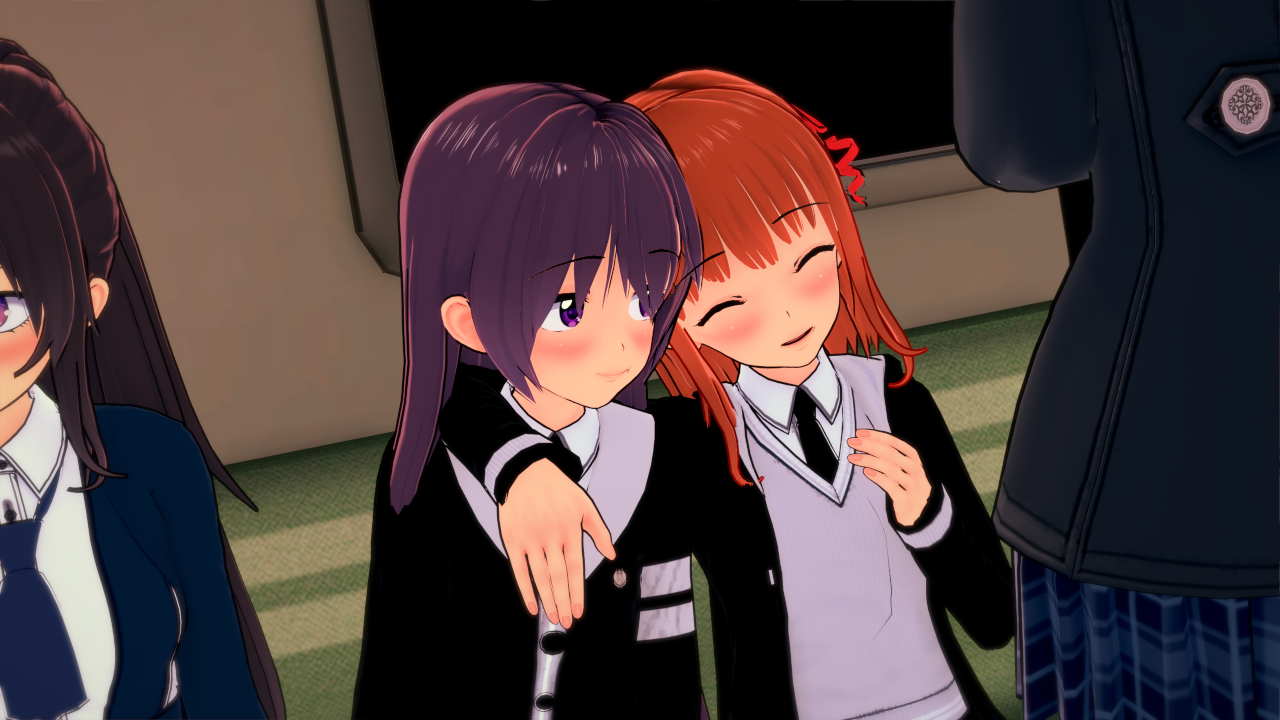 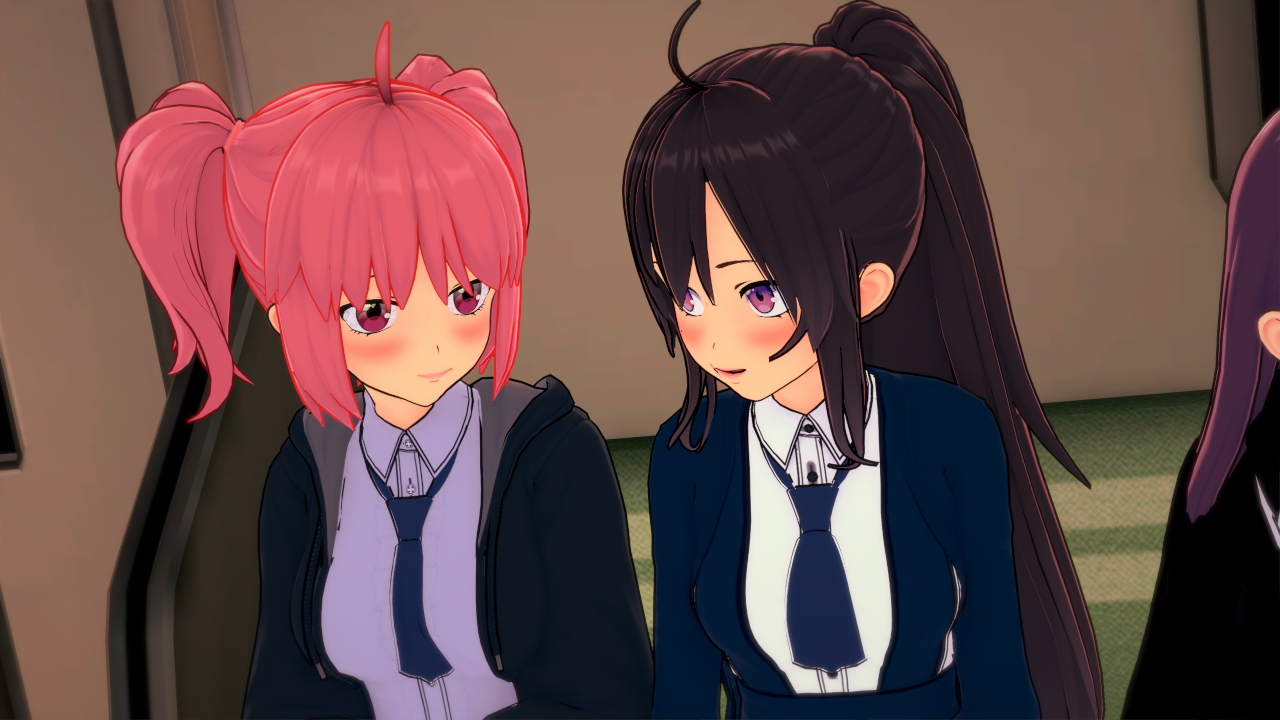 “So, what school does Nagumi-chan go to?”

Hana-chan asked. Since she mentioned it, I realized I didn't know what school uniform she had on. It was dark with a dark red skirt and very trendy for the age of a little girl. No doubt, whatever the elementary school was, it had style, no doubt.

Okabe-san said as she turned to the little flower. She looked down at both Sora-chan and Hana-chan. With one hand on her hip, she continued.

"She goes to Fukui elementary. She's very shy and doesn't open up easily to people. With everyone here… she's going to feel overwhelmed, so…."

She stopped herself and looked away. When it came to Nagumi-chan, Okabe-san always had a set of rules ready to help her grow. She was less like an older sister and more of a parent. I understood what she was trying to do, which was to always put her sister in a safe place.

“Now that I think about it, I don’t think I met your little sister, Okabe-san.”

Mae-chan jumped in, sounding a tad excited. Okabe-san glanced over and didn't say a word. I could feel the animosity between them even though Mae was clearly trying to bridge a connection. So, I tried to salvage the conversation to avoid letting the empty air linger for too long.

"She's adorable, Mae-chan! She has long hair the color of Okabe-san’s and even has the same almond-shaped eyes."

My childhood friend lit up and began bouncing in place.

“Is she cuter than Hana-chan?!”

Hana-chan shrieked like a banshee as she attempted to fight Mae. Sophia crossed her arms and sighed with a smile.

“Nagumi-san is a lovely child. I met her a few times.”

She turned to her former enemy.

Okabe looked away, embarrassed, it seemed. To my surprise, she blurted something out…

“Yeah, she told me she missed seeing the “woman with the bright hair.””

They both faced one another. The awkwardness of it all was still there, and nothing would change in a matter of minutes, hours, days, or even weeks, but hopefully it will.

“So, Okabe Kasumi-san, I have a question.”

Takade-san was about to leap out of her seat, but Saya-san kept her close. However, her eyes still glimmered like gemstones.

Sora-chan teased, likely feeling where this conversation was going.

We all sighed deeply. At some point in time, all of us, aside from maybe Hana-chan or Sora-chan, have dealt with her one-million-degree probe of everyone’s love life. It seemed this was a test for her to get anyone in her fold.

"Like, I can tell the two middle schoolers have the hots for each other but you! Do you like to have a game going on somewhere?"

Hana-chan protested as she stomped up close to Takade-san. People on the train were turning in our direction, and a few were grumbling. But I didn't have the power to calm them down. Takade-san had already lit a match, and Hana-chan was burning.

Saya tried her best to mediate the situation, but Takade-san, as carefree as always, shook her head.

"Girl, I can tell when someone has a thing for another!"

Ignoring Hana-chan’s puffed cheeks, she turned back to her original target, the cruel Okabe-san, who was staring daggers into her by this point.

"So… you have to have someone you like. Boy, girl, or whatever!" 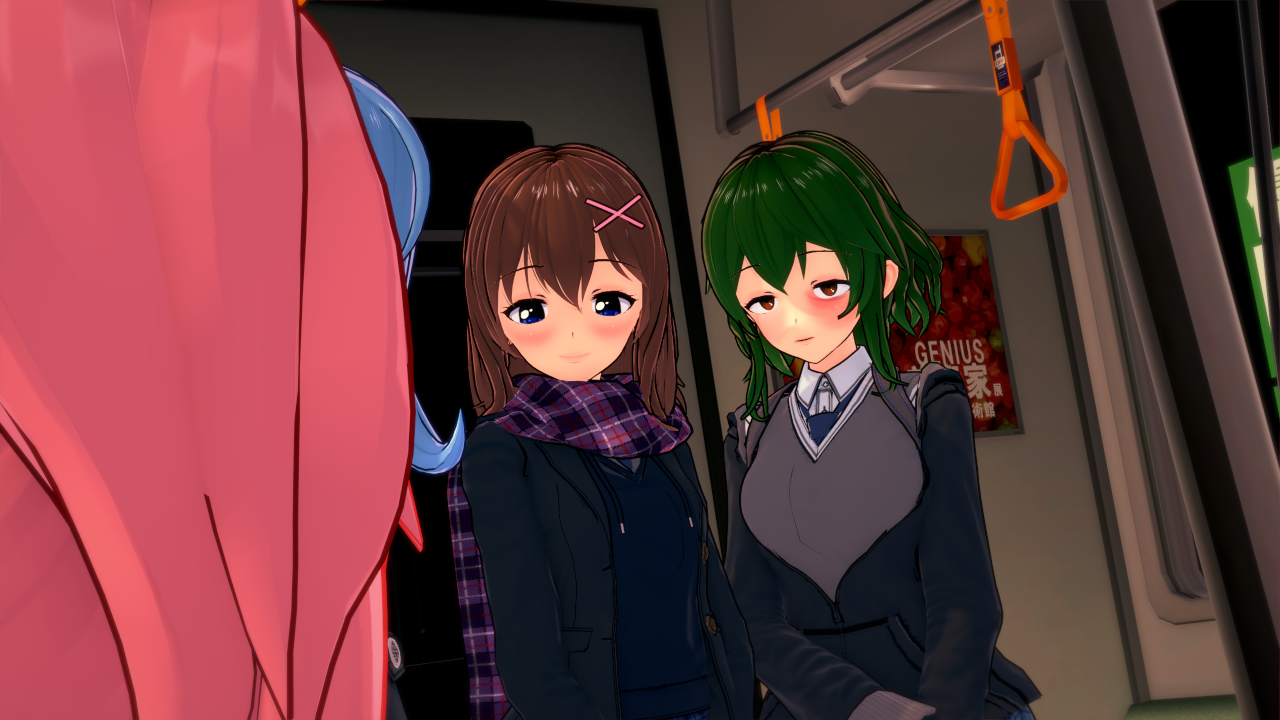 “Then you gotta open up your heart a little more! There’s a lot of fantastic people out there.”

Like a daydreamer, her eyes became starry. Hana-chan seemingly gave up on her and awkwardly made her way back to her seat next to Sora-chan. Her best friend petted her head, assuring her that it would be okay. I looked back at the two of them. Saki, the excited lovestruck girl, and Okabe-san, the closed-off one.

“Open my heart? Who the hell do you think you are?”

“What she’s saying is… she hopes you find happiness.”

She caused Okabe-san to look away as her cheeks went a tad bright. Mae-chan giggled, and even So-chan appeared to be blushing too.

“You girls are stupid.”

"I mean, come on, even the super skittish Yuko-chan has the hots for—"

We all turned towards Yuko-chan, who caused a scene. Her eyes were wide, and her body was the color of a crab. She was breathing heavily as she successfully stopped Takade-san from exposing her secrets.

Okabe-san giggled. It took me a bit to realize that she was smiling… over a simple moment between high school girls. Something that should be considered normal in her life that wasn't. Yuko-chan and I met eyes. She put one hand behind her back and gave Takade-san… then me a glance. Her personality has grown over the time that we’ve known each other. Honestly, everyone in this group is slowly molding each other into better people, and things are changing for the better.

We all prepared to exit the train. Mae-chan lifted her bag over her shoulder and squealed in excitement.

“I’m gonna spoil the heck out of Nagumi-chan. She’s gonna be calling me Onee-chan by the time she leaves.”

“Don’t give her too much. Whatever she wants, she needs to work for it. And really, calling you Onee-chan?”

The door opened, and my childhood friend was the first to skip out. Takade-san, likely not able to hold in her excitement either, rushed out after Mae-chan. She grabbed her from behind, and they fought in this useless struggle, laughing and playing. Sora-chan bounced up and made her way to them too. The three of them fought with hugs and laughs. The rest of us watching thing strange events unfold.

“They are going to give me a headache.”

Okabe-san complained, despite the clear smile on her face. I nudged the side of her shoulder.

She brushed her ivy hair.

She began walking, but the smile held on her face.

"Alright, you three, act your age!"

So-chan jumped in, trying her best to pull them off each other. But her short and petite build wasn't helping, and she just became a cog in the wheel of this strange, contorted mess.

We walked for around five minutes or so and what appeared around the corner was a small elementary school. The sign indicated the Fukui school for youth. When we arrived, a few kids were already exiting the building. We watched for that green-haired cutey to step out from within the doors in anticipation.

Hana and Sophia-san screamed in unison.

Yuko-chan, being the tallest, was the first to spot her. With her head down, she walked alone out of the school. She was always so coy, and it made me think that she might not have many friends because of it. She would rarely say a word to anyone, and just recently, she opened up to me just enough for her to speak a few sentences here and there. 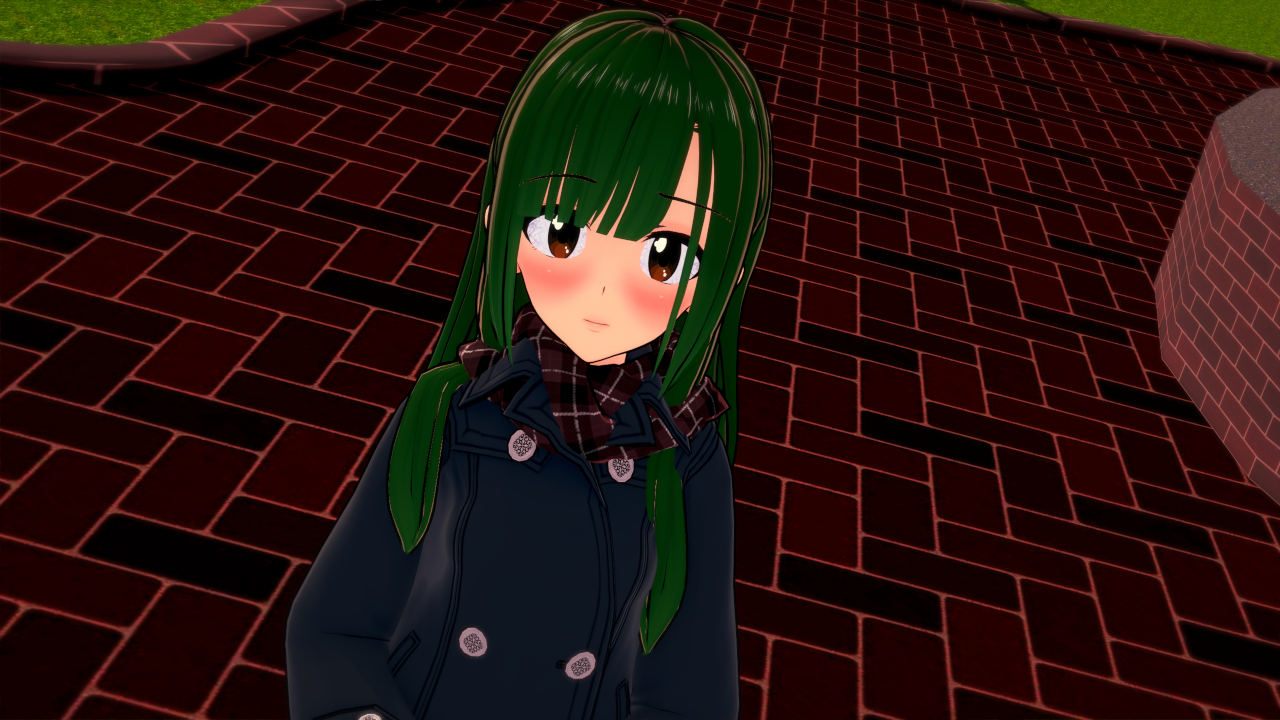 Okabe-san approached and made her way up to her little sister. Before they came over, she bent down and whispered something. We all watched as she turned around, pointed in our direction then looked back at her little sister. I could see her shaking her head yes and no occasionally. It was like they were making a battle plan before going into war, and for all I know, that was just what they were doing. After around a minute or so, they stood back up and walked over to us. 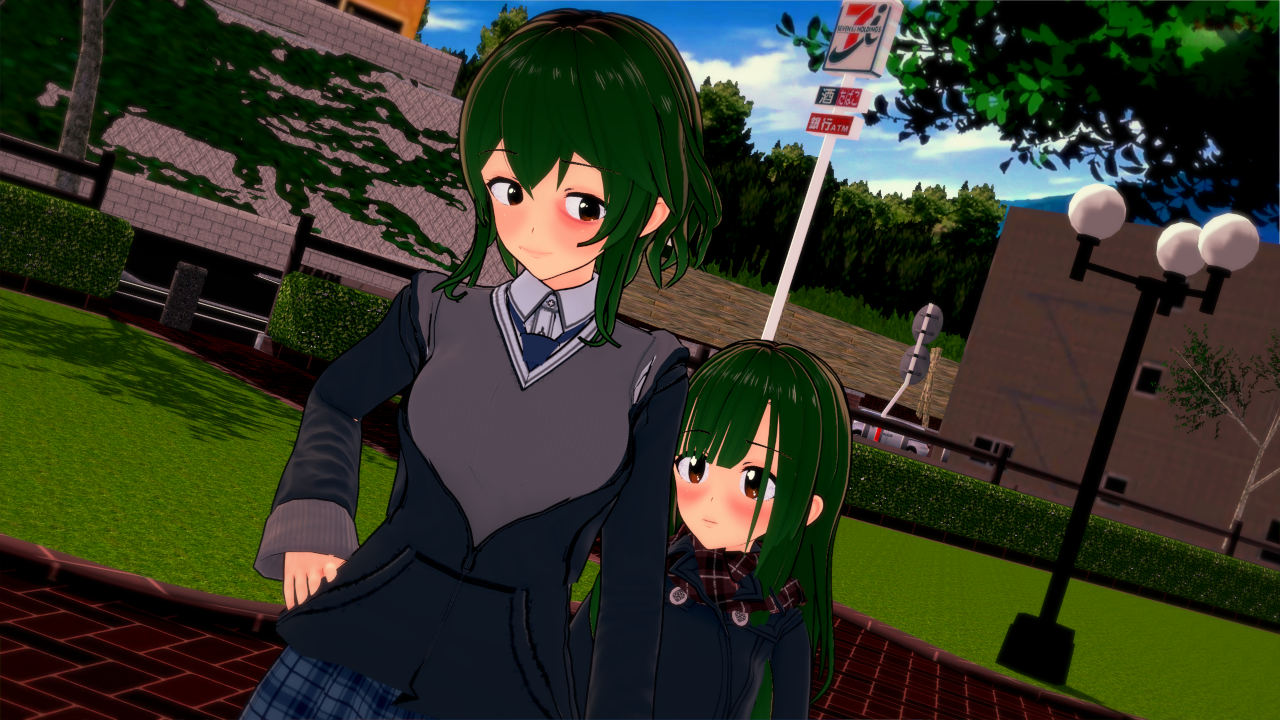 She turned back to her little sister with one hand on her hip.

"I don't expect you to remember their names. Just be good."

Instead of acknowledging them, she hid behind her little sister. Her mouth open, she marveled at… my childhood friend for some reason. Mae-chan got the hint and shook her ponytail. 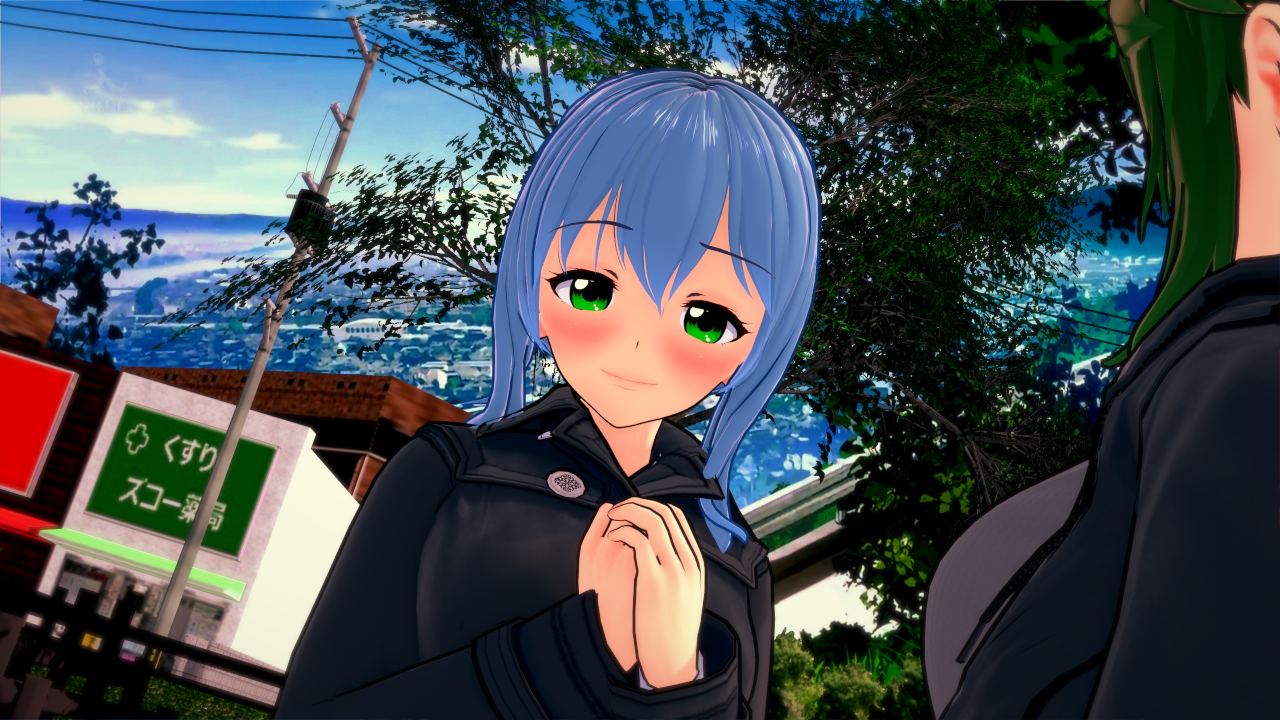 In fear, she went behind Okabe-san’s leg like it was a pillar. Occasionally, she would peak out a marvel at Ma-chan again. Still, she had no intentions of talking to her or anyone else. She was horribly shy as always.

“Nagumi-chan, we’re going to go shopping then get some food. What do you want to eat?”

Everyone watched in awe as she slowly came out from behind her sister. She looked at the rest of the group, rushed from behind her, and caught onto my hips. Everyone giggled, even So-chan and Yuko-chan.

She whispered to me. That settled it. We were getting burgers for dinner. I turned to her older sister, slightly annoyed at the scene.

"She wants burgers, everyone."

I announced. Takade-san jumped and clapped.

“If the little princess wants burgers, we’re getting burgers.”

Mae-chan and Takade-san began chanting "burgers!" as we got back on the train.